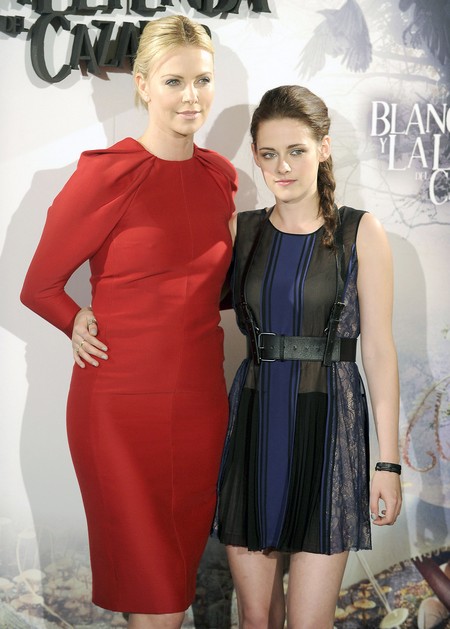 It looks like Robert Pattinson and Liberty Ross aren’t the only ones furious over Kristen Stewart’s affair with Rupert Sanders. Charlize Theron, who worked with both snakes on Snow White and the Hunstman, is said to be beyond furious.  The South African actress is said to be very close to Liberty but also formed a tight bond with Kristen as well, thinking of her as a younger sister.  Radar Online has more on Charlize’s anger:

“Charlize is absolutely fuming with Kristen for having an affair with Rupert” an insider revealed. “She is very tight with Liberty, has often socialized with the family over dinner and cannot believe Kristen has done this. When they were filming Snow White and the Huntsman, Charlize felt like an older sister to Kristen, and they were always sharing advice. Charlize confided to her new pal about her adoption plans.”

It seems that although Kristen is a lousy actress with marginal skills she had no problem fooling everyone around her.  Maybe she has more talent than it appears…

“She even asked Kristen if she wanted to be her baby Jackson’s godmother – that was how close they were. But Charlize had no idea what was going on between Rupert and Kristen and now feels completely betrayed by the whole incident. It’s certainly left Charlize between a rock and a hard place, because she feels great sympathy for Liberty and the kids and yet, she has a sisterly love for Kristen.”

Yep, that sounds about right. Lurid affairs have a way of affecting a lot of people, not just those directly involved in the hook up. How do you think this whole mess will shake out?  Rob is said to have packed up and left the home he shared with Kristen.  Will Liberty bounce Rupert out of their family home.  Will either of these couples survive the fallout?  Tell us your thoughts in the comments below!