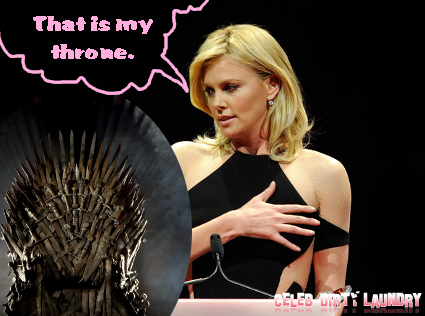 Charlize Theron might just be hellbent on getting herself a gig on HBO’s hit series Game of Thrones, saying she foams at the mouth like a House of Stark direwolf every time she watches the show. Charlize, who can be seen in the upcoming Prometheus film, is apparently obsessed with the show and admits that she indulges in the sword-clinking-medieval-sexy-fantasy series while she’s up late at night with her son Jackson.

“I watch a lot of stuff that people are somewhat shocked by, but I am absolutely like foaming at the mouth with Game of Thrones [. . . .] When my son came in my life, that was a bottle feed because I couldn’t watch television, I used to watch so little. That was my TiVo feed every two hours, was watching Game of Thrones,” she tells Collider.

All right, GoT producers, you need to grab Theron NOW . . . while she’s still available for, and open to the idea of being part of, your show.

Don’t you think that Charlize has the perfect look for an incredibly badass female character on the series? I think she’d mesh very well with the current cast and that magical, beautiful ambiguity that Charlize brings to every screen would add yet another layer to the show’s complexity.

Collider came right out with the question and asked the actress if she’d be open to a role on the HBO series.

Theron responded with, “I’d be totally open to it. I’m open to anything, dude.”

In other words, she’d probably say yes to — if the cash-money-dollar level was right — the job. Do you think Charlize would do well on the Throne? Let us know in the comments below! And don’t forget to come back here for all your latest Game of Thrones news and LIVE recaps!