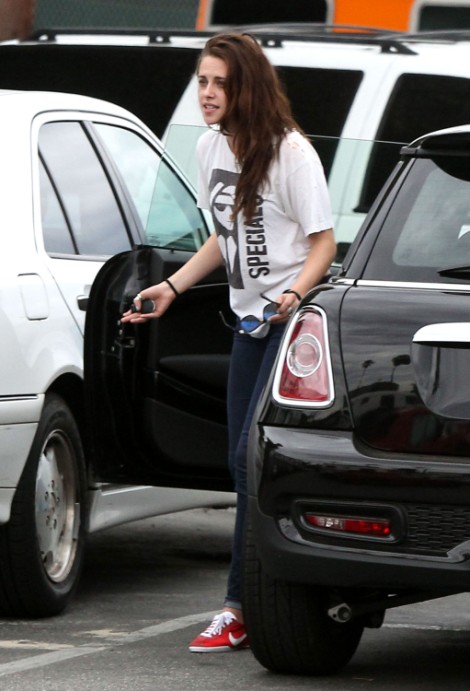 Kristen Stewart just can’t seem to figure out why people hate her so much. True, she made out with a dude 20 years older than her essentially partnering in the break up of his family. And she broke Robert Pattinson’s heart and eclipsed his current movie promotions with her trampiric drama (depending on how well Cosmopolis does though, it might not have been such a bad thing). And she made a disastrous PR blunder admitting she was wrong making it totally OK for the world to label her as wrong. But Kristen is all like, “Come on! That really wasn’t all that bad! Give me a break!”

Actually TMZ reports Kristen’s more like, “What the f-ck! Blame Rupert! It wasn’t just me in that f-cking car!”

Our sources tell us … Kristen can’t believe the public isn’t painting Rupert Sanders as the bad guy. She’s grousing that he’s 19 years her senior and was “in a position of power over her” … being a director of a movie she had just shot and presumably someone she was going to work with again.

Kristen is also incensed that she’s being called the big cheater. Although she knows she shouldn’t have done it because she was in a committed relationship with Robert Pattinson, she feels Rupert is in a totally different and far more culpable situation, being married with 2 kids.

We’re told Kristen fears her career may be irreparably damaged — something she believes she doesn’t deserve as a 22-year-old single woman who made a stupid mistake.

I’m totally Team Kristen on this one. She’s young and stupid and made a mistake. We need to stop crucifying this girl. She’s pulling herself out of movies; lost her boyfriend and is a laughingstock. I’d say she’s done her penance.

Having said that, I’m not sure if going on the defensive is the best move for her at this point. I think it should have been her first move. Instead of writing that emotional and hasty apology letter she should have launched more stories revealing Rupert as the aggressor in the scandal. Doing it now only makes her look like she’s searching, no matter how true it may actually be. But if she can’t defend herself, what can she do? I’m not sure. I think the only card she can play now is the sympathy one. Apparently she’ll be at the MTV Video Awards and TIFF, which means she has two high profile situations to look morose as hell and gain some pity. Perhaps with enough pale skin and black and blue under the eyes she can shift the tides a little more in her favor. So by the time the Twilight promotions come around, her fans won’t want to find the nearest broomstick to stake her in the heart as much as they did before.

A public apology from Rob wouldn’t hurt either. A dinner date specializing in humble pie? I’m not holding my breath for those though. No, Kristen got herself into this mess. She can’t rely on Rob to get her out. Unfortunately she needs to keep lying low; keep her trap shut. The last thing the public will take is a mouthy Kristen Stewart b-tching she’s getting screwed. She definitely is but that doesn’t change the fact that she did the screwing first.

Do you think Kristen has a point? Even if you do, is she in a position to go around defending it?