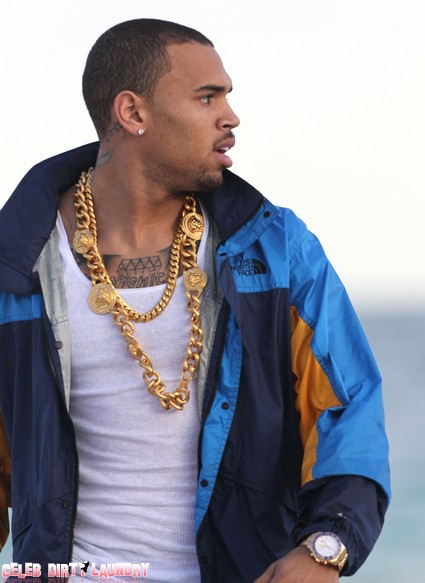 Chris Brown was looking like the fresh prince of Miami Beach as he trotted along the beach sporting his ching-a-ling bling-bling. Chris showed off his bling-bling at the beach in Miami while spending the day with his friends and girlfriend, Karrauche Tran. Brown was reported to be taking this holiday in Miami to try and dispel rumors that he has been hooking up with his ex, Rihanna, behind Tran’s back.

Rihanna has made it perfectly clear that she still loves Chris by her recent tweets which state that she still misses him. There’s no doubt in anyone’s mind that these two have since hooked up but we just fear the outcome of it all. Chris was at Rihanna’s birthday and Rihanna was catering to him like he was her lord.

Chris really likes showing off and he felt it was very important to sport his expensive jewellery at the beach – yes, the beach! Carrying several chains around his neck while running to get into a car with a couple of his friends in Miami – surprised he didn’t bring along his new grammy award.

Why would anyone want to wear chains at the beach? Perhaps Chris thinks he might need something handy to barter with. But, whatever – it’s like questioning why celebrities wear sunglasses in nightclubs, it just doesn’t make sense. I guess it’s a kind of way for them to comfort themselves.

Click on the thumbnails below to enlarge 14 pics of Chis with his bling bling on the beach!