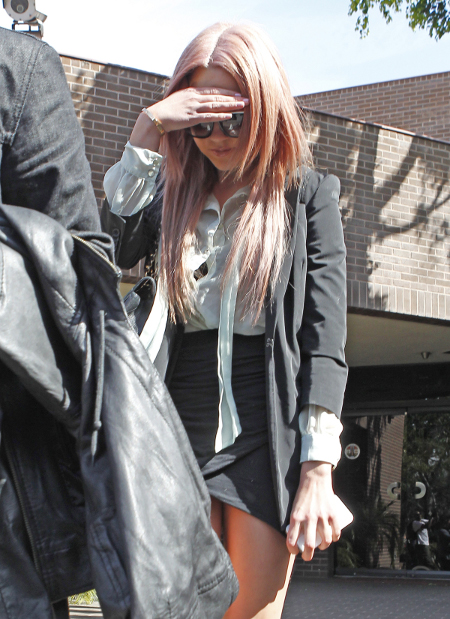 Amanda Bynes, that actress we only seem to hear about when she rear-ends someone, is the subject of another police report, which was filed yesterday afternoon by a woman claiming Bynes rear-ended her and then drove off without exchanging the proper insurance information. The woman, who goes by the name of Kisa, said that she spoke very briefly with Bynes, who then quickly returned to her car and sped off.

Kisa tells TMZ that she tried multiple times to exchange information with the young celebrity but that she simply would not cooperate. Bynes claimed that the cars were not damaged and, therefore, the swapping of something as silly as insurance info was unnecessary. Kisa, however, claims that there was significant damage to Bynes’s car. If you’re a driver in the L.A. area, watch out for the Amanda Bynes Hit and Run special.

TMZ exclusively reports: Kisa (last name witheld) tells TMZ she was driving her Toyota Corolla on Ventura Blvd. in the San Fernando Valley when she was struck by a woman in a black BMW. Kisa tells TMZ she didn’t recognize the woman at first — because she “looked like a hot mess” — but once they began talking, she realized it was Amanda Bynes.

Kisa says she got out her insurance card to exchange information, but says Bynes “seemed nervous about that.” She says Bynes told her the damage to the Corolla didn’t look that bad and proceeded to push her bumper back into place (that didn’t work, see pic below [click here]).

Eventually, Bynes just said SEE YA, hopped back in her car, and sped off down the road. Kisa immediately called the cops who, later, arrived at the scene of the hit and run and filed a report. When Kisa told the cops the identity of the person who’d hit her car, the officer who was filling out the report replied with, “Didn’t she just get a DUI?”

It’s pretty bad when even the cops start remembering your ever-growing list of felonies. The cop was in fact correct. Bynes was arrested on suspicion of DUI in the early part of April, and she was also accused of two hit and runs back in May. Wow! Just think . . . if Wreckless Driving was an event in the Olympic games our girl Amanda would be the sure-fire winner. No contest. Gold medal. Get your act together, Bynes, or get your act off the road. Sweetie, you’re dangerous. And that’s why I will give you a full-ride scholarship to attend my new Celebrity Driving School. You’re welcome.