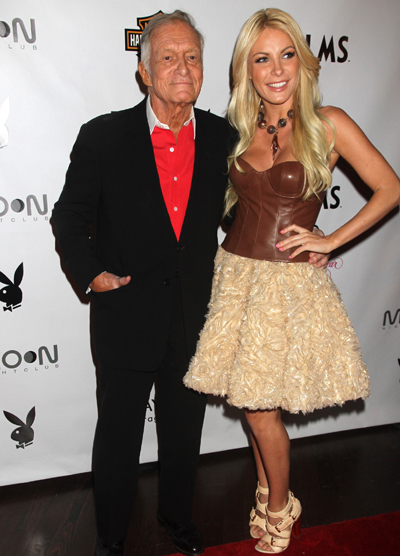 She’s baaaccck! Nearly a year after jilting her then-fiancé Hugh Hefner, Crystal Harris has reportedly crawled back into his 90-year-old arms.

The 25-year-old Playmate told reporters after she called off their June 2011 wedding, five days before it was supposed to happen, that it didn’t “seem like the right thing to do,” but, according to RadarOnline, it seems that she’s changed her mind about that. Perhaps, her flop of a career outside of the Playboy realm caused her to have a change of heart?

“Crystal begged Hef to let her come back,” said a source to the website. “He surprisingly doesn’t have any hard feelings against her, so he let her move back into the Mansion.”

What?! How can you not have hard feelings for the woman who practically ditched you at the altar? Related: Hugh Hefner Is Thankful Crystal Harris Dumped Him

What’s worse is that Hef may even be considering getting engaged to Crystal, who pawned the engagement ring he gave her after they broke up.