BY Annemarie LeBlanc on April 10, 2012 | Comments: one comment
Related : Dancing With the stars, Dancing With The Stars Season 14, Reality TV, Recap 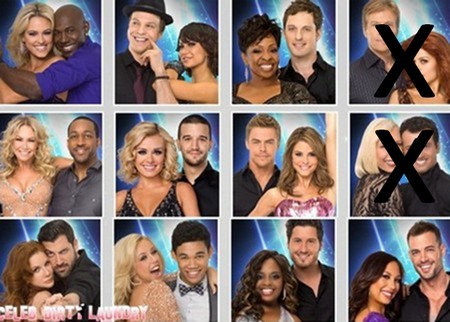 Tonight on ABC it’s the Dancing With The Stars 2012 third Result Show of Season 14 and we will say goodbye to one more contestant tonight.  On last week’s episode we lost our second casualty of the season, actor Jack Wagner.  If you missed the show you can read our official recap here!

The theme for this week’s episode was “Rock Week’  with KISS opening the show with a spectacular performance of “Rock and Roll All Nite.”  The remaining ten couples performed dances to some of the greatest Rock songs of all time.

After last night’s performances Donald Driver topped the leaderboard.  Donald and his professional partner Peta Murgatroyd wowed the judges with their paso doble to Jimi Hendrix’s ‘Purple Haze’ – which saw Donald dance topless and he earned a total of 27 points.

This week was the first time Katherine Jenkins and Mark Ballas did not top the leaderboard, they were only awarded the couple 24 points for their paso doble.  Last night’s show was not without drama, Melissa Gilbert injured herself during her performance and had to be taken to hospital following their routine which had scored 22 points.

At the bottom of the leaderboard after last night Soul singer Gladys Knight – who dubbed herself ”the grandma of rock and roll” – took bottom place on the leader board with a score of just 20 points, one point behind Sherri Shepherd.  If you missed any of last night’s performances you can see all the individual videos here!

Who do you think will be going home tonight?  We conducted a poll and 43% of viewers feel Glady will be going home. Gavin follows a close second in the poll with 37 % of the votes.  It is really going to depend on their fan base,  so you never know.  If you have not voted yet, go here and vote and lets us know who you think we will be saying goodbye to tonight.

Tonight’s show: the show is opened by KISS singing their song “Lick it up.”  The judges asks Donald Driver to do an encore performance of his Paso Doble.

Sherri was really upset and she thanked everyone for letting her live her dream!