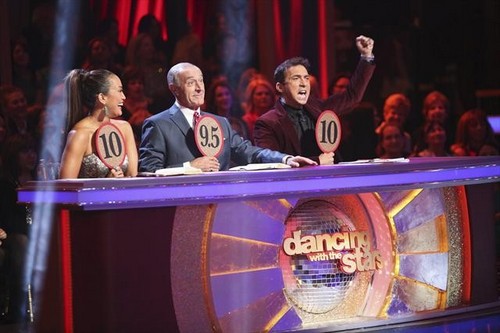 On tonight’s show each of the remaining five couples will dance to a classic song from Michael Jackson “Bad” album. Also on Monday night, each couple will dance a dance style they have not yet danced to a theme which was chosen for them by another couple on last week’s Results Show.

Tomorrow night’s “Dancing with the Stars: All-Stars the Results Show” will feature the UK’s new boyband sensation, The Wanted, will perform a medley of their current single “I Found You” and their biggest hit, “Glad You Came.” Legendary performer and world famous choreographer Paula Abdul returns to the ballroom to perform in our final “Macy’s Stars of Dance” with a groundbreaking number.  And before the night’s end, two more couples will be eliminated.

Tonight’s episode is going to have all the usual glitz and glam in the ballroom, which you won’t want to miss. So be sure to tune in for our live coverage of ABC’s Dancing With The Stars All-Stars Week 9 Performance Show – tonight at 8PM EST! While you wait for our recap, hit the comments and let us know what you thought of last week’s episode of Dancing With The Stars All-Stars.

Len: “Fred and Wilma have never danced so well, I thought you captured the flavor of the caveman, Tony had the muscle and Melissa had the hustle!”

Bruno: “So much whiplash, a couple of turns through you lost your footing, you can’t be shaking side to side!”

Carrie Ann: “I loved it, it was the perfect way to bring the two dances together!”

Len: “Shut up, this dynamite was fantastic”

Bruno: “This time they have done it Bhangra style!”

Carrie Ann: “What do you say to that, Sean is out of breath, it was great!”

Len: “There were a couple of awkward moments but well done!”

Bruno: “It was a blend of Cirque de Soliel – you only lost stepping in the beginning, other than that it should have been a ten!”

Carrie Ann: “I loved the concept and the routine, but it kind of threw you off, it was really sloppy – I wanted it to come together but it didn’t!”

Bruno: “That was a Looney Tunes version of James Bond, the most fun performance!”

Carrie Ann: “it was your most animated performance ever!”

Len: “I thought it had verb, it had attack, your energy was fantastic.”

Bruno: “Kelly has been upstaged by a Speedo, there is one thing, the placement was not there!”

Carrie Ann: “I have to agree, it was all Paso, it was lacking the Flamenco, it was almost non-existent.”

Len: “I would be really disappointed if you were not here next week!”

Bruno: “That sequence of lifts was extraordinary, you really excelled all expectations and deserve to be in the final!”

Carrie Ann: “That was beyond anything I could have imagined for you, the lifts were out of this world!”

Len: “Part one you learn the routine, part one you sell it and you did two parts”

Bruno: “That was very interesting, you went for shakes, lines and styles, pure Argentine Tango, it was brilliant!”

Carrie Ann: “Your movements were excellent but I felt you lacked the passion and the intimacy of the dance, it was still beautiful!”

Len: “It was like the sea, it was wave after wave exciting, it was fabulous!”

Bruno: “You nailed it, it was perfectly pitched!”

Carrie Ann: “That is what I am talking about, you don’t have to over dance in this competition!!”

Len: “I think you had the biggest challenge, your challenge was ease and elegance, I think you coped marvelously well!”

Bruno: “I loved your criminal intent, the footwork could have been more exact!”

Carrie Ann: “In both of your routines you have brought your A game, we have to judge on technique though.”

Len: “It had control, the lines were fantastic, you did it wonderful, well done.”

Bruno: “That was smoldering, you performed like you never had and it was good to see!”

THE END – Join us tomorrow to see who the 2 couples eliminated are!!!