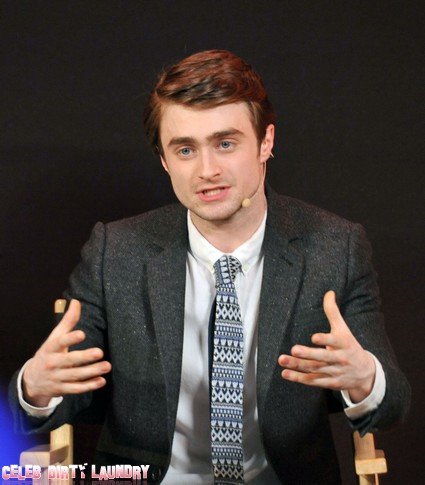 Daniel Radciffe thinks he has become a sex symbol and is gratified by this – regardless of whether the admirer is a man or a woman. Very open minded of young Daniel to accept the sexual admiration of both gay and straight fans. In fact the celeb says he is ‘honored’ to be a sex symbol and “does mind who fancies him.”

Daniel of ‘Harry Potter’ fame is always surprised to be told by fans that he is the object of their lustful desires but he always feels that they are attracted to him.

Daniel Said:  “I got told the other day I had a really nice ass. I didn’t know that. I don’t mind it.  It’s fine if people want to make me the subject of their sexual fantasies – good luck to them, fantastic, I’m honoured to be in their dreams.  Growing up I never thought that would be the case so it’s very flattering and not something to object to at all.”

Daniel is dating Rosie Cutter and has previously questioned the star about having gay friends that are attracted to him, but he admits he rarely thinks about it.

He said:  “The other day my girlfriend Rosie asked me, ‘Do you find it weird that some of your gay mates think about you sexually?  I’ve never really thought about it but I don’t care – if they want to it’s fine. I don’t care who fancies me, I care who I fancy.”

Daniel Radcliffe is a sex symbol? Can you believe this? Do you find Daniel very sexy? Sound off in the comments below – nothing too graphic mind you.