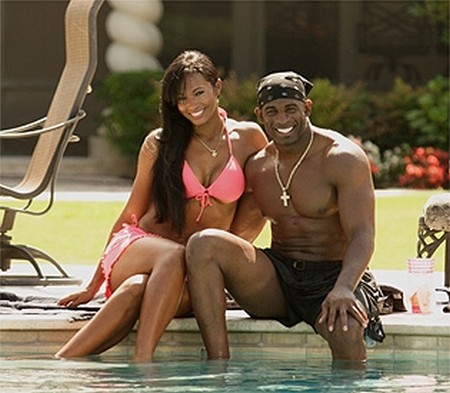 Deion Sanders may have won that nasty fist fight he had with Pilar Sanders and her girlfriend, Dee boswell, but he is losing the money war.  The Saga Continues! Deion Sanders vs. Pilar Sanders, it is finally coming to an end but at what cost?  Well I’ll tell you one thing the cost will not be cheap for this bobocito to get rid of this chica!

I’m not sure whose side I’m on so I guess I’ll just tell the juicy facts of the story.  The judge, Greg Janda in Fort Worth, TX has made a judgment before the divorce is final that Deion will pay, and I do mean pay.  He has to pay Pilar $10,550 a month in child support for their two sons and $3500 also a month for the mortgage on her new place.

Of course they cannot reside in the same residence anymore, not after that altercation that they had last month in April when she got arrested so she needed a new place to live.  That is not even the end of it – Deion has to pay Pilar’s attorney fees until the divorce is final to the tune of over $200,000.

Honestly what’s going on?  Wasn’t it just last month that he said that he was “jumped” by Pilar and her friend so what’s with the heavy payout?  There is way more going on here that no one is talking about here, Hmmm…..Maybe there is a little more truth to Pilar’s story.  That’s just something for all of us to think about.  Now we’re on Sanders’ watch, let’s see how the story unfolds!