Demi Lovato Dating Niall Horan – She Admits It At Last! 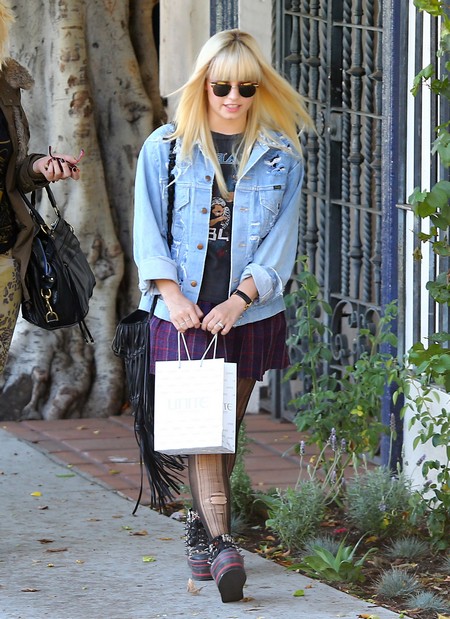 Is this another one of Simon Cowell’s ploys to boost X Factor USA ratings?  A source right there on the inside of Demi Lovato’s private life has revealed that she is dating One Direction’s Niall Horan! Allegedy, “Demi’s told the guys backstage she and Niall are loosely dating – it’s casual but they are definitely dating, albeit long-distance,” according to the insider.

A couple of months ago Simon needed a lift for his show and so he instructed Demi and Niall to play along and pretend to have some potential for romantic interest in each other.  At that time Celeb Dirty Laundry called BS on the entire showmance – and of course we were correct. Niall is a total stud who has literally millions of women dying to get with him so why would he go for seriously damaged goods like Demi?  Right, he wouldn’t.

So now we are expected to believe AGAIN that Niall and Demi are enjoying a casual romance – all cute and teenaged.  Of course it’s possible that Demi has a ‘little crush’ on Niall and yet is exercising the mature restraint for which she is so well known.  But then it’s also possible that Kim Kardashian married Kris Humphries for love.

From The Mirror: But for the first time, US X Factor judge Demi Lovato has revealed exactly what’s going on between her and Niall Horan.

And it appears they are officially “dating”.

Don’t hate me, One Direction fans, but it looks like it’s getting serious…

“He has a lot of great qualities,” gushed Demi.

“He is an amazing listener and makes me laugh a lot, two of the main qualities I look for.

“He knows I have a little crush on him, and we enjoy having dinner when we get the chance. We speak and message all the time.

“I don’t want a relationship over Skype; we are both in a place where we feel zero pressure to rush.

“We share the philosophy that the right one is worth waiting for.”

It’s refreshing to know that Demi and Niall share the philosophy that the ‘right one is worth waiting for’ but then we have to ask what was Demi doing making it with the known lowlife Wilmer Valderamma?  Did she think he was Mr. Right? Tell us dear readers, can you believe that Demi and Niall are dating for real?