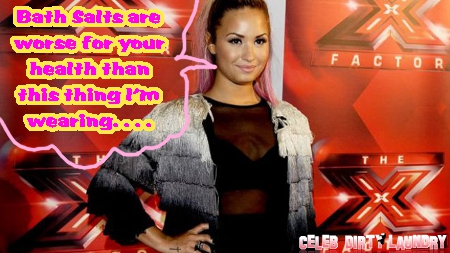 Demi Lovato is one of the best judges in the history of X-Factor USA. Her sympathetic attitude and ear for talent goes a long way in the search for the next global superstar. However, Demi is still struggling with issues of her own, most notably her alcohol and drug issues. According to the National Enquirer, friends of Demi are terrified that Simon Cowell will push her into this familiar abyss. She recently said about Simon, “I always have my wall up when it comes to him. I’m like, ‘You’re nice right now… but I know what’s coming.”

Lovato entered rehab two years ago after struggling with eating disorders, self-mutilation, and an addiction to drugs and alcohol. She hit rock bottom during a brawl with dancer on a Jonas Brothers supporting tour, and subsequently entered rehab to sort out her problems. Lovato has since this incident not relapsed into the familiar territory of sadness, depression, and obsessive control. Cowell, on the other hand, has been one of the nastiest characters on reality television. During Paula Abdul’s first season of American Idol, she quit seven times, mostly due to Cowell’s bitchiness and bullying. He might be a perfectionist when it comes to the art of singing, but he is definitely not a bad person.

These two worlds will most definitely collide during the live shows, and we all know how dramatic those vote-off moments can be! Could these emotional coup d’états have an effect on Lovato’s emotional wellbeing? Will Cowell be her boogeyman? A source close to The X-Factor said, “The biggest problem is Simon’s penchant for recognizing people’s weaknesses, then using those frailties against them. Demi seems tough, but she still struggles with personal issues. If Simon starts making remarks about her drinking and drugging past, it will drive her over the edge for sure.”

Okay. We doubt Simon would blast off on live television about Lovato’s past, but our opinion doesn’t matter that much – yours does. So, let us know in the comments below what you think about this story. Do you think Cowell will pop Lovato’s brain with his bitchiness?