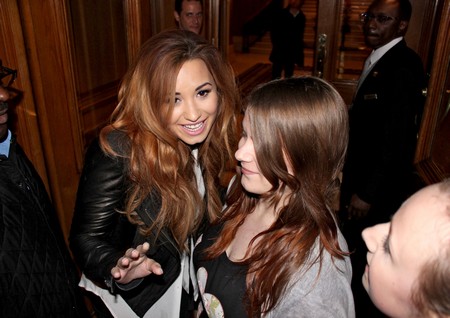 Demi Lovato has a terrible history of substance abuse and addiction. This goes along with her self-harming and body image issues to produce a young person who is definitely at risk. One would assume that Demi needs a stable environment free of alcohol and drugs in order to stay safe. But now a report has surfaced that Demi  has fallen off the wagon and is partying again regularly.

Radar has an exclusive that claims although Demi has worked hard to sober up and get her head together, “the former Disney star is still partying hard behind the scenes.”  Apparently being in rehab wasn’t enough to scare Demi away from the nightlife as “those close to Demi say there are a few habits she didn’t drop.”  An insider adds: “But she’s not as sober as she’s leading everyone to believe and is still partying hard.“

A couple of months ago Demi was caught out partying as we reported here at Celeb Dirty Laundry, and there were suggestions that she might have been using drugs at the time.  Now this new report brings back the fears that Demi might be back on a downward spiral. This can’t be good news for Demi, nor can it thrill Simon Cowell.

Simon is gloating over snagging both Britney Spears and Demi for this coming season’s The X Factor USA and the last thing he needs is Demi back in rehab.  When American Idol seems to be crumbling with the firing departure of Jennifer Lopez and Steven Tyler, and Simon set to dominate this autumn’s TV season, he doesn’t want Demi Lovato partying and flipping out.  Bad enough he has to deal with nutcase Britney and her antics.

It seems ironic and somewhat telling that Demi kicked two rappers off the stage during the X-Factor North Carolina auditions after the pair made a reference to smoking bath salts last week.  Was Demi guilty of protesting a little too strongly?  Do you think Demi is at high risk for relapsing?  Let us know in the comments below.