Demi Moore Delayed Divorce To Ashton Kutcher Because Of Money, Not Love 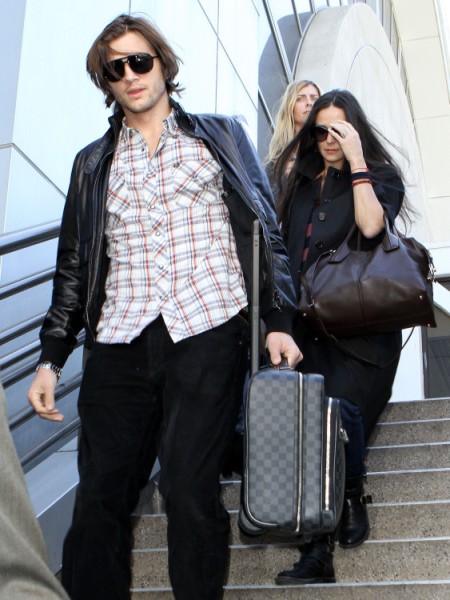 Now this is what I’m talking about Demi Moore! Good PR spin. Your estranged husband sends you divorce papers four days before Christmas so you leak a story to TMZ saying you wanted it done a year ago after he cheated in the first place. I don’t necessarily believe it with all the rehabs and crazy behavior but I appreciate that you are trying to save some face. 2013 is the year of the Demi Moore/Ashton Kutcher divorce and her comeback year!

Many assumed that Ashton  finally filed on Friday because he got tired of waiting for Demi to pull the trigger. I guess some of that is true. Ashton was giving Demi the privilege of filing first but she never took it leading many, including myself, to believe that she just couldn’t get over her much younger husband. But au contraire, apparently Demi just wanted to make sure she was financially taken care of in the split. Sources told TMZ that Demi was hoping for a similar package that she received form ex-husband, Bruce Willis, which was very generous. Even though Demi is reported to be worth more than Ashton, she’s still hoping for more generosity.

But will she get it? The fact that Ashton just went ahead and filed leads me to believe no agreement has been made. Why else would he just jump out and do it like that during this time of the year? It does’t give you the warm and fuzzies, does it? I’m sure for awhile Demi was just bitter and wanted to get Ashton where it hurt the most since he cheated on her but surely a year had to have quenched the blood thirst. Right? Or maybe not? Perhaps Demi is still feeling as vindictive as ever with all the new Mila Kunis sightings?

Do you believe Demi Moore delayed the divorce only over money or was she probably hoping Ashton would come back to her?