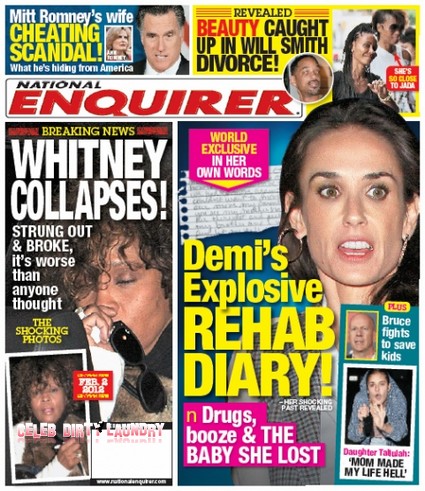 The current issue of the National Enquirer features the cover story detailing the shocking truth of Demi Moore‘s drug and anorexia induced collapse and subsequent emergency hospitalization – right from the pages of her own diary. Apparently the Enquirer gained access to Demi’s private diary and the revelations within are horrifying. They include the sordid details of endless rounds of excessive partying during which Demi was raging on booze and drugs. But even more amazing is the revelation of the baby she lost. Was it Ashton’s? Did this send her into her anorexic downward spiral?

Demi’s daughters Rumer, Scout, and Tallulah have been devastated by their mother’s disintegration. And who can blame them? The irresponsible and selfish Demi was actually partying with Rumer – taking illegal drugs – the night of her collapse when the 911 call was made.

Even worse, while Bruce Willis is struggling to save his children after Demi’s collapse, daughter Tallulah is crying:  “Mom made my life hell.”

Despite these gruesome revelations about the harm Demi’s behaviour has caused her family, ex-husband Bruce and her loyal daughters are trying to encourage the desperately ill woman to get her skinny butt into rehab. But Demi refuses to go. As we reported yesterday Demi is NOT in Utah and not in rehab.

Even her estranged husband Ashton Kutcher, from whom she filed for divorce in November, is trying to convince Demi to go to rehab – but she keeps saying ‘no, no, no.’

So what do you think, does Demi have to get her butt to rehab stat?  Sound out in the comments below and let us know your thoughts!