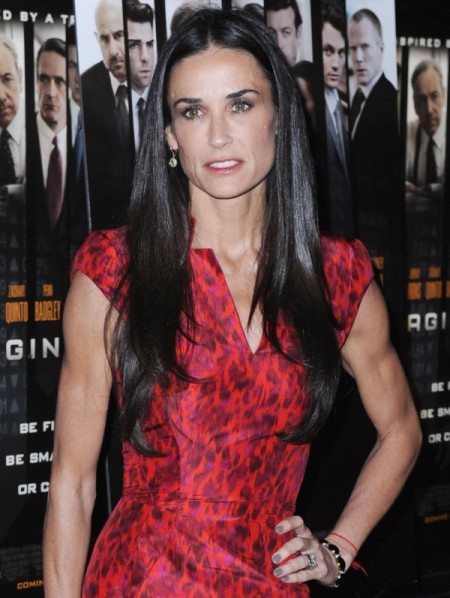 Nothing says catharsis quite like a celebrity tell-all book. Demi Moore has had her fair share of loves and losses and is ready to tell the world all about them. We already know but I’m not sure she knows we know, you know? Should Bruce Willis and Ashton Kutcher be worried? If you believe Now magazine that’s a yes!

Now can reveal Demi Moore’s getting over the heartbreak of losing husband Ashton Kutcher, 34, by writing a tell-all book.

A source says: ‘She’s planning to spill all the juicy details on her addictions, her meltdown and her marriages.

‘But Demi’s daughters hate the idea – they don’t want their lives laid bare to whole world.’

If I were Freddy Moore I’d be all like, “B-tch you’ve had two way more famous husbands than me. Give me back my name!”

Does this sound like a great idea? I’m thinking not so much. Who’s the genius who signed off on this? We know her kids aren’t talking to her so it couldn’t have been them. Whatever happened to diaries? Can’t she just spill her secrets in a book for her and her alone and get some peace that way instead of becoming a memoir author? Demi Moore doesn’t need money. She doesn’t need anymore fame or attention so what’s the deal? I’m sensing this is an ego-booster. Ashton is busy playing footsie with Mila Kunis for Dodger fans and the world to see. He’s moved on. Bruce Willis has a new baby girl. He’s moved on. I have no idea what good ‘ole Freddy’s doing but I’ll bet he’s moved on too. Why can’t Demi? I know aging isn’t the most forgiving thing in Hollywood, but damn girl, go out and score some roles and reclaim some fame! Stop with the pretend boyfriends! No one believes them anyway. If you want to convince the world you’re still in demand and desirable then don’t write a book about your dependencies on blow and young men! Trust. It’s not the PR move you should be going for.

You know the people who write celebrity tell-alls? They are the famewh-res like Jesse James, Linda Hogan and Joan Collins. Demi is a Brat-Packer for crying out loud. Show some pride! Although, Rob Lowe just released his memoir and it was pretty good. I love how he ripped on Tom Cruise. But there’s a distinct difference between Lowe and Demi. Lowe isn’t a basket case (that we know of). He’s on a hit show and made a deal with the devil to age better than Dorian Gray ever dreamed. Demi’s fresh out of rehab and her daughters have considered taking a restraining order out against her. She’s competing with Angeline Jolie for the lowest body fat percentage. She’s… raw. And a place of fragility isn’t the strongest ground for writing a memoir.

Do you agree that Demi probably isn’t stable enough to write about her life with clarity and insight or do you believe this tell-all could be what she needs to reevaluate her decisions and make a fresh start away from Ashton and her other demons?