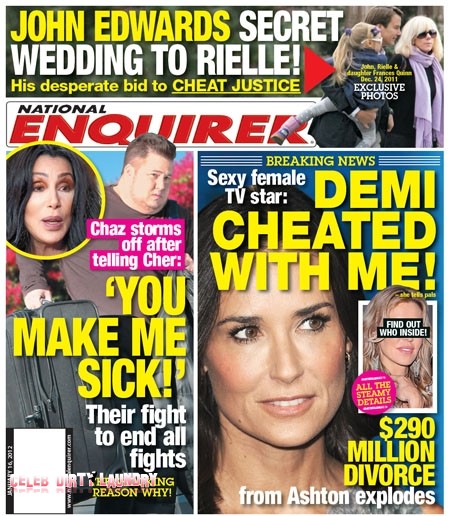 This week’s National Enquirer threatens to blow the cover off of Demi Moore’s lesbian proclivities. Demi and her ex-husband Ashton Kutcher were rumored to have engaged in threesomes and other such variations on standard his and her sexual activity. In those tales it was bandied about that Demi enjoyed the occasional bit of girl-on-girl activity and she never denied it. Now a sexy female TV star is screaming that Demi cheated on her! The unnamed star’s revelations are bound to inflame the already overactive rumor mill that speculates as to the true nature of the sex lives of Demi and Ashton. I can’t wait to read the print edition to learn the truth!

Other hot stories include info about John Edwards secret wedding to Rielle. We can only imagine what the sneak got up to.  An exciting feature explores what is behind Chaz telling her mom, Cher: ‘You Make Me Sick.’ One would assume that Chaz was grateful for Cher’s support during his successful run on Dancing With The Stars. Could Chaz be pissed that Cher is not supporting him in his decision to dump his alcoholic fiance, Jennifer Elia?

As we reported, apparently Jennifer did not live up Chaz’s expectations after he became so popular on DWTS and now he is looking for greener pastures. Chaz told the heartbroken Jennifer – ‘I can do better than you’ after learning that his fiance had gone back to her heavy booze drinking.’

The Enquirer also question Taylor Lautner’s sexual preference with a bombshell revelation – but is it true? There will also be revelations that Jim Carrey is being taken for an expensive ride by a ‘young Russian beauty.’

More believable is the mag’s claim that Rihanna has been ordered to get to rehab before she and her career disintegrate. As we reported, Rihanna was forced to cancel shows in Sweden with her doctors ordering her to curb her constant partying as it was ruining her health. Rihanna was also spotted at a drug den in Amsterdam – all of this lends credence to claim that rehab will be next stop