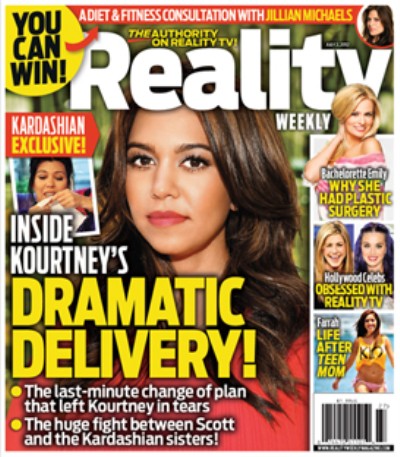 The current issue of Reality Weekly magazine has the cover story details on Kourtney Kardashian’s last-minute decision which resulted in a dramatic delivery for her baby girl. The reality star was left in tears over the gut-wrenching decision while partner and social pariah Scott Disick fought with her opinionated sisters in the background.

Could it have been Kourtney’s desire for a water birth? She practically shoved her hands down her uterus and delivered baby Mason herself so I wonder if she let the doctors take the reigns on this one or if she let the calming waters encourage the little girl out into the world.

Also featured in the magazine is Bachelorette Emily Maynard’s reasons for going under the knife for that boob job. Emily’s  feuding with family members at the moment so maybe the enlargements were just to perk up her self-esteem?

Teen Mom star, Farrah Abraham’s showing the results of her boob job on the cover and revealing what’s happened in her life ever since the MTV show wrapped. The final season is airing and Farrah has just moved to Florida to get away from her seemingly helpful and loving parents. I can’t stand watching Farrah and her rude behavior but I’m interested to find out if she’s still living away from her family. I honestly didn’t think she’d be able to make it on her own, especially since she just bought another dog. I feel so sorry for that little guy. She’s not an owner I would want!

And lastly, Katy Perry and Jennifer Aniston make an appearance as stars obsessed with reality TV. I wonder what shows they like? Those women always have paparazzi in their faces so I’m sure it delights them to be able to sit back and watch other people’s lives unfold on the screen. Do you think Aniston likes the show Cheaters?

For these salacious goodies and more be sure to pick up a copy of Reality Weekly next time you’re out!