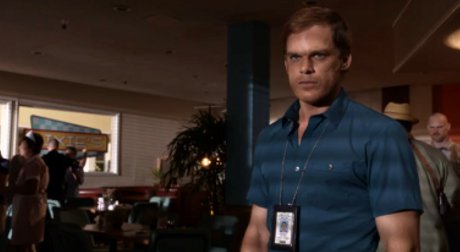 On this Sunday’s episode of Dexter we saw Deb rescuing Hannah – a fun turn since she’d most likely have been glad if she’d bled out. Dexter also got closure with Isaak, taking out his two hit men but then losing his new friend to murderous strip club owner George. He gave Isaak a burial at sea in the spot where his true love Viktor went down.

Then at the hospital, Dexter finally confessed his fears and without using the L word, pretty much his love as well. Aw, it was so sweet. I wonder which one will try to kill the other one first. My money’s on Dexter. If you’re allergic to spoilers and previews, please look away now.

Upcoming on episode 10, they’ve given a name to the murderous arsonist – they’re calling him The Phantom and he’s struck again. There’s finally a witness that sees the arsonist leaving the scene in his silver fire-proof suit. She says it looked like an alien or a monster. Dexter’s got his eye on the arson investigator as the killer. I agree.

Twice he tried to overlook evidence at each of the first two crime scenes that Dex noticed. Dexter tells his honey about the flaming felon and she knows right away he’s thinking about giving him the plastic wrap and knife treatment. He tells Hannah he promised Deb he wouldn’t take any cases away from the police.

For the second time in months, Dexter’s trying to explain his Dark Passenger to a woman. Hannah doesn’t quite get it and like Deb shares a perspective on Dexter’s need to kill – they both seem to think he can just stop – as if it was smoking or drinking. Kind of like when Deb tried to rehab him out of killing…

Hannah says she doesn’t have anything like that compelling her to kill, but then her Dad shows up – if he’s not her dark passenger, he may be the driver of her crazy bus. Dexter isn’t happy to see him – wonder if her Dad may end up on Dexter’s table at some point for throwing is precious girl in the lake.

LaGeurta’s chatting with Tom Matthews about Dexter – she’s floating a theory that Doakes may have been on to Dexter. She says there’s something “off” about him. Since Tom was Harry’s best friend and covered up his suicide, I wonder if he’ll cover for Dexter as well. What he wants is his pension, so I’m thinking he’s going to find a way to help himself without helping La Guerta if he can figure a way.

I’m excited about this episode – Dexter’s got La Guerta hot on his trail, itching to kill, but the guys he wants to take out is promised to the police and Hannah doesn’t seem to understand his dark passenger just when he thinks she might be the girl who “gets” him. Hmm… Can’t wait for Sunday!

Tune in here at CDL for our live recap of all the killer action on Dexter Season 7 Episode 10 “The Dark… Whatever”!