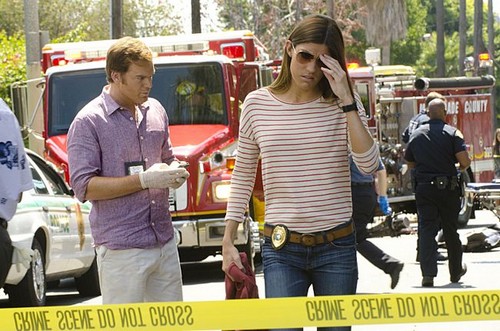 I am really enjoying Season 7 of DEXTER – the Hannah and Dexter dynamic is really sexy and the Dex and Deb dynamic has just gotten really disturbing which is even more interesting. I love that on last night’s episode Deb finally told Dex that she loves him. His reaction was priceless.  Did you watch last night’s show?  We did and we recapped it here for you.

How icky do you have to be to gross out a serial killer? He looked floored and uncomfortable and flummoxed. Even Deb admitted that she’s worse than her serial killer brother for falling in love with her brother. To be fair, they’re not blood related, but it’s gross no matter how you cut it…

Now that Dexter is really starting to admit that he feels something for Hannah, it seems like he may have found the love of his life – that’s pretty good for a guy who couldn’t feel any joy unless he was putting a knife into someone. He took a huge step by letting her see his kids – she is, after all, a killer herself.

Spoiler alert: If you’re one of those people who doesn’t like spoilers, stop reading now! We have some juicy spoilers for you about the season 7 episode 9 of Showtime’s “Dexter.”

Official Showtime synopsis of next week’s episode: As Dexter scrambles to track down Isaak, a power struggle erupts among the Koshka Brotherhood, which could prove to Dexter’s advantage. Meanwhile, Miami Dade tries to smoke out the Phantom Arsonist.

But on next Sunday’s episode 9 “Helter Skelter” Dex comes home to find not Hannah but Isaak Sirko waiting and making them a nice cup of tea. Uh-huh. Remember he just admitted to Dex that cop killing Viktor was the love of his life?  Sirko pulls a gun just to let Dex know he has it, but stashes it and tells him he just wants a chat. He tells him Hannah is safe and comfortable.

Seems like Sirko is holding Hannah hostage because he wants Dexter’s help taking care of the mob hit men that are on his tail.  When Dex turns to his loving sister Deb, she’s less than sympathetic and wants him to let Sirko have her – she says “you don’t have to save her – you shouldn’t even be with her.”  Deb’s a little biased though when it comes to who she thinks Dexter should be with – but it would make family reunions smaller and more awkward!

She tells him they have no future and he says he’s not so sure, but the only thing he knows is that he doesn’t want Sirko to kill Hannah. He needs Deb’s help to get Hannah away from Sirko’s sidekick Yerg.

Dex tells his Dad that he’s spent his whole life having to cover up who he really is – but he doesn’t have to do that with Hannah.  Sirko wants to know how many men Dexter’s killed and my favorite serial killer tells him if he hurts Hannah, he’ll find out.

Meanwhile, on the Bay Harbor Butcher front, La Guerta isn’t giving up. If she keeps it up, Dexter may have bigger problems than the Ukranian mafia. She goes to see her old nemesis Captain Matthews about the evidence she’s finding that suggests the BHB is still at large!