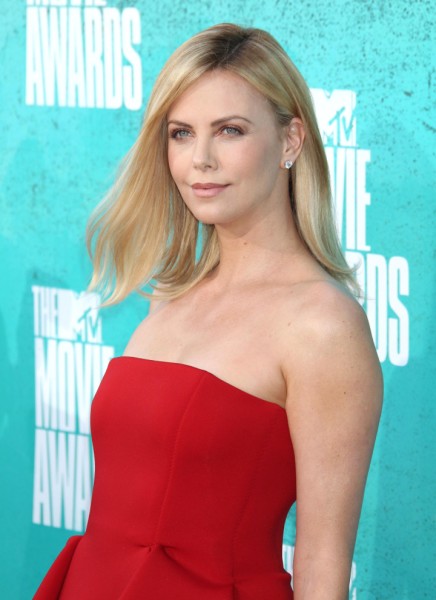 Charlize Theron and Eric Stonestreet are dating. You heard me right. One of the most beautiful women in the world is dating that fat guy from Modern Famliy. Say what? But it gets better. She might have taken a page out of co-star Kristen Stewart’s book and broke up his long-term relationship as well. What is it with those Snow White and the Huntsman girls?

So this is what I know so far. Eric split with girlfriend of three years, Broadway actress Katherine Tokarz, a couple months ago. She’s actually a hottie too so Eric can bring in the pretty girls. It must be the humor. Pretty girls love to say how much they love senses of humor. Anyway, the Daily Mail reports Charlize and Eric met earlier this year and hit it off.

“Charlize and Eric get along incredibly well,” a source said. “They started off as friends but things are blossoming between them. Eric is down to earth and funny and Charlize thinks the world of him. It’s early days but they’re very fond of each other.”

So is this is a big deal? Not really, I guess. There’s some shock value to the story. Eric doesn’t look like he would be Charlize’s type. She’s usually seen with pretty boys like Stuart Townsend and Ryan Reynolds so maybe she’s widening the dating pool. She’s a new mom now so perhaps she’s trying to look for that whole package. Fine. I’m down with that. But the timing is suspect, right? I only harp on it because there were all those stories of Charlize being p-ssed at Kristen for breaking up her friend, Liberty Ross’, marriage. True, Stonestreet wasn’t in a marriage, but three years is serious enough. Did Eric meet Charlize, get to flirting, and then get to thinking he had a chance? You can’t blame Eric too much. Who would give up a chance to be Charlize Theron’s boyfriend? I would. I hear she’s a mega pain in the ass but I’m sure she can be nice to the people she likes. And right now she likes Eric Stonestreet. It’s a head scratcher but there have been other eyebrow raising relationships in Hollywood: Megan Fox and Brian Austin Green, Michelle Williams and Jason Segel and Courteney Cox and David Arquette.

So it can happen. I just wonder how long it will happen. Charlize might be monogamous but she has a problem with marriage and isn’t afraid to move on when it suits her. She dumped Stuart Townsend after nine years. She just never seems like a sure thing to me. This totally reminds me of Young Adult! Is life imitating art for Charlize who in the movie seeks solace from her messed up life by getting down with a pathetic, sardonic chubby guy played by the amazing Patton Oswalt?  No offense to Eric. I’m not saying he’s anything like that but it’s an interesting connection nevertheless!

What do you make of this couple? Charlize and Eric are unlikely but that doesn’t mean they can’t last! But what about the timing? Did Charlize pull a Kristen?