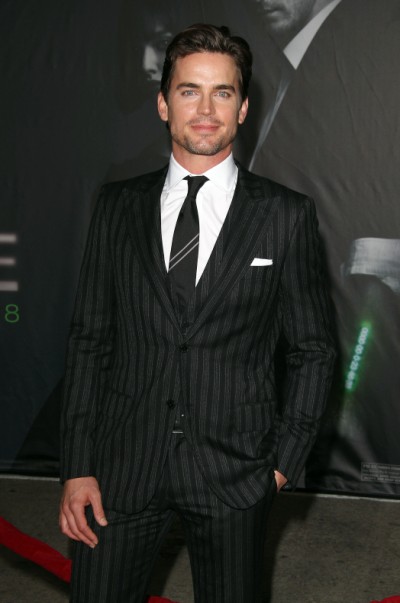 Ellis has been beyond annoying on twitter, tweeting about who he thinks should play the lead roles of Christian and his shy, unassuming sexpot Anastasia Steele. He’s already noted he thinks Ryan Gosling and Scarlett Johansson would be his dream team but has also mentioned Alexander Skarsgard and Ian Somerhalder as worthy potentials. He’s not such a huge fan of Matt Bomer on the other hand. Over the weekend he tweeted, “Fifty Shades of Grey: Casting Matt Bomer is the equivalent as casting Jesse Tyler Ferguson….”

Now why is that Ellis? Matt Bomer is gay. He’s not shy about it. He’s also supremely talented and uber hot in Hollywood right now coming off a major success with Magic Mike. Women obviously had no problem salivating to him as he gyrated on stage in nothing by a g-string baaabay. (Did you get the Snoop Dogg reference because I sang it in my head when I wrote it!).

That’s what I got out of the tweet. Jesse Tyler Ferguson is gay. He plays a gay man on television – not flamboyantly gay, but obviously gay. So is Ellis is saying casting Bomer would be like casting a really gay dude as a heterosexual S&M nutcase and women won’t buy it? I’m telling you right now he’s wrong. Bomer is GORGEOUS and has the perfect bone structure to play Christian. True, his hair isn’t blond but I could overlook that and I’m sure a lot of you out there could too. You could dye his hair orange and I’d still watch him. Again, this isn’t Shakespeare we’re talking about. The actors who play Christian and Ana just have to be hot and have chemistry – case closed. I was rooting for Skarsgard (hoping for Michael Fassbender) but could easily settle for Bomer.

I can’t help but wonder about Rupert Everett right now. Too out of left field? Maybe, but I’ve had a lot of coffee this morning. Rupert was incredibly vocal and b-tchy about the fact coming out ruined his leading man career and actually warns young actors not to reveal they are gay until after they are finished with Hollywood. He got a lot of sh-t for it. But can you blame him now? Bomer should be considered without Ellis likening him to one of the gay guys on Modern Family. It’s offensive to both. And what’s worse is that Ellis’ tweet could have taken Bomer out of the running because it’s joined Ferguson and Bomer in the people’s consciousness. Is that necessarily a bad thing? No. Ferguson is obscenely talented and great on his show. But it’s not necessarily a good thing either. If I were Bomer, I’d want to kick the crap out of Ellis. I don’t really care what he meant to imply by the tweet. I’m sure he didn’t intentionally mean to be homophobic, right? What’s important is that it wasn’t a straight forward thought (no pun intended) and could easily be misconstrued. As far as I know Ellis still hasn’t been tapped to be the screenwriter of the movie yet so why he keeps desperately throwing his two cents in is beyond me. Oh wait, no it’s not. He’s desperate.

Do you think Ellis’ comment about Matt Bomer as Christian Grey was out of bounds and possible hurt the actor’s chances or was he just saying what everyone was thinking?