Did Selena Gomez And Nat Wolff Kiss Cause The Justin Bieber Split? (Photos) 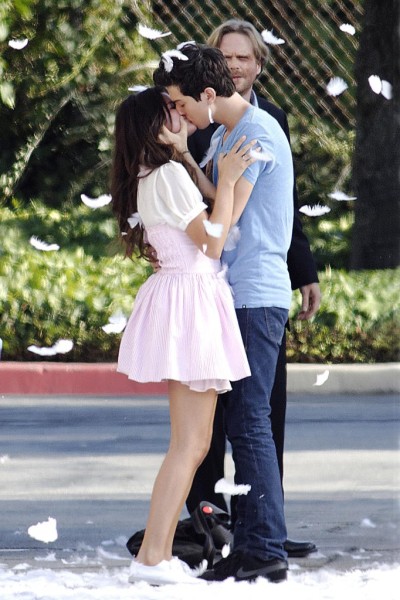 Let’s forget about the proposal. Let’s pretend we’ve never heard of Barbara Palvin and let’s close our eyes to the fact Selena Gomez and Justin Bieber are practically children and prone to overblown emotion. Those are all little nibbles but, according to new sources, the major bite that took a chunk out of Jelena was the kiss Selena Gomez and Nat Wolff had while filming their new movie.

It happened back in August while filming Parental Guidance and Bieber just hasn’t been able to burn it out of his jealous brain!

“[Justin] freaked out on that,” says one insider close to the former couple. “He would get jealous and she wouldn’t tolerate it.” A second intimate source couldn’t specifically say whether the photograph was the start of their relationship falling apart but did say that “Justin was very jealous of it. He knows it was a photo of them filming, but it still made him jealous.”

There was no comment from reps for either star. But our sources say the jealousy worked both ways. “They’re young. Of course they have their jealous streaks,” the second source continues. “Justin has gotten jealous, and so has Selena.”

This is old news. Star actually had this scoop back in September so this is nothing to be surprised about. Does it show immaturity on Justin’s part? Of course! But he’s a child star who probably hasn’t heard the word no in awhile. Can you blame him for acting the douche? Selena must have just gotten tired of placating his ego. The kiss was for work for christ’s sake. And, no offense to Nat Wolff, but he isn’t exactly Channing Tatum. He’s got the skinny, gawky, nerdy cute thing going on which makes Bieber’s temper tantrum even more ridiculous.

Are you surprised the Selena Gomez/Justin Bieber split didn’t happen sooner? How did Selena put up with nonsense for two years? Oh, right, I forgot, her manager made her.