Drake To Be Arrested Today 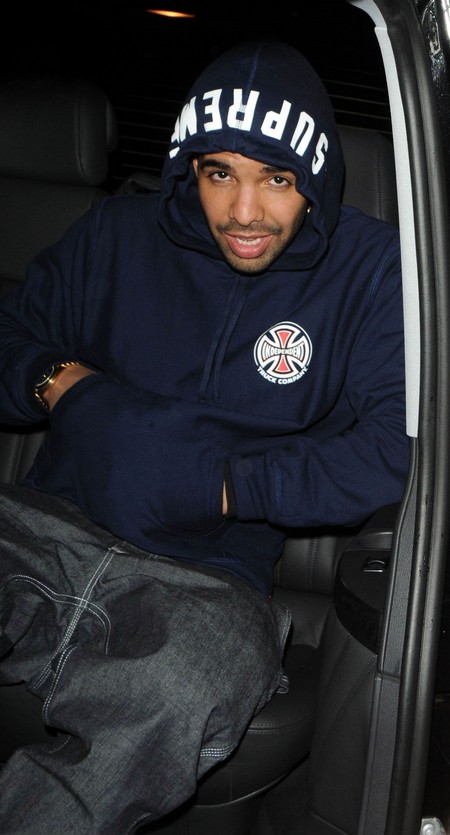 Drake will be arrested today and charged with reckless endangerment for throwing a bottle at Chris Brown in the bar brawl at W.i.P. Thursday night in New York City. According to sources if Drake does not turn himself in to police he will arrested at him at his concert tonight at Jones Beach.  A witness told police that the obnoxious Drake threw the bottle, however the witness said that the bottle did not hit anyone.

Apparently Drake sent Chris a note saying “I am f*ck*ng the love of your life.” This was after Chris has sent Drake a bottle of pricey champagne.  Not nice Drake!  Can’t blame Chris for getting rather upset at that.  Of course anyone who takes Rihanna seriously is cracked out.  The girl behaves like a totally promiscuous slut – what do they say in gangsta land?  Let a ho be a ho – meanwhile these two jerks, Chris and Drake, are instigating bar brawls over Rihanna.

FOX NEWS Reports: Rihanna-loving rapper Drake — whose nasty note to Chris Brown sparked a VIP-room melee — is going to be arrested for throwing a bottle at his rival.

Drake is expected to be charged with reckless endangerment, sources said, after a witness told cops the hip-hopper hurled the projectile during the 4:00am local time mayhem Thursday at the SoHo hotspot W.i.P.

The witness did not believe Drake hit anyone with the bottle.

If Drake does not agree to surrender, cops may arrest him during tonight’s concert at Jones Beach, the sources said.

The 25-year-old hip-hop star, who briefly dated Rihanna, drove Brown into a rage when his table sent over a note that read: “I am f*ck*ng the love of your life.”

Drake’s camp said the fight was instigated by a member of Brown’s crew who made offensive comments toward their entourage, which included rapper Meek Mill.

It is nice for people to see exactly what their favorite stars are really like.  Chris Brown and Drake are two people who you wouldn’t want to let into your home, let alone pay money to see.  Are you a fan of either of these two punks?  Let us know in the comments below.