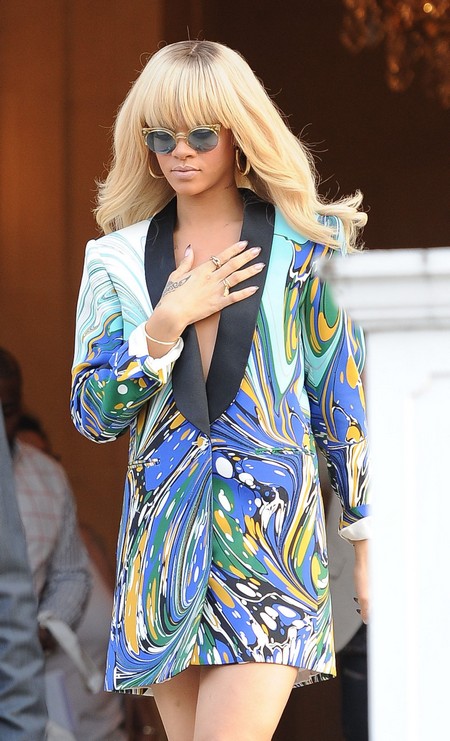 Rihanna has moved on to another celeb rapper in her attempt to sleep her way through Hollywood.  Her latest victim is A$AP Rocky with whom she flirted wildly last weekend at Coachella.  Rihanna especially admired A$AP’s lovely gold grill and suggested that she would adopt the same dental style.

Rihanna definitely has the hots for A$AP Rocky after recently completing her sexual business with Meek Mill and sex stalking Ashton Kutcher.  According to reports, Rihanna spent the evening drinking with A$AP in the VIP area of the California festival, following his performance on Saturday night.

A source told The Sun: “Rihanna took a real shine to A$AP. She couldn’t take her eyes off him. She hung around after his set to chat to him and seemed to be a big fan.”

“They were getting stuck into champagne with mates before moving on to rum — they even asked a lackey to get ginger beer as a mixer for it.”

“Rihanna asked A$AP about his gold teeth, joking that she’d love to get the same thing done.”

Rihanna claims she has trouble when it comes to finding a man who can cope with her career – although she hasn’t given up hope.  Given up hope?  Rihanna is chewing through men as if they were candy – she hardly appears to have given up hope.  She said: “I feel like it’s hard for everybody! I don’t think it has anything to do with being famous. There’s just a major drought out there.”

Rihanna thinks that there is a drought out there?  She surrounds herself with men and has affairs with many on a regular basis.  What drought is she talking about?

Do you think Rihanna has difficulty meeting men?  Let us know in the comments below.