Drew Barrymore Wedding Photos: The Kiss, The Dress and The Celebrity Guests! 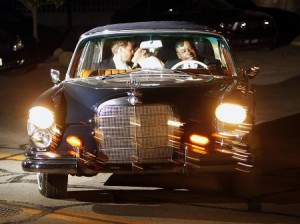 What kind of weekend was it for Drew Barrymore? Wedding, photos, wedding cake and paparazzi, oh my! Despite trying to keep her nuptials on the down low, the paps hunted Barrymore down at Drew’s Montecito mansion as she said “I Do” to her now husband Wil Kopelman on Saturday June 2nd, 2012. It was at her Montecito home where the wedding was held and according to the Daily Mail, it was a star-studded event despite its intimate setting. The rehearsal dinner the night before also gave away any secrets these two were trying to hide from the photographers.

People magazine dished out the details saying that the Jewish ceremony was attended by Drew’s best friend Cameron Diaz, Reese Witherspoon and her husband Jim Toth, Jimmy Fallon and his wife Nancy Juvonen and Busy Phillips. There were a ton of white umbrellas the guests carried to shield their faces from the paps.

As for the ceremony? A source describes the event as “a classic, simple, very pretty, garden-inspired wedding”. Well she has been married twice before so why get too crazy, right? Married twice before or not, Drew still indulged in a Chanel gown while flower arrangements included “hydrangeas, small irises, cream and pink roses and lavender lilies”.

Here’s hoping that third time is the charm for Drew! Let me just say I love the photos of these two kissing. It really seems as if Drew may have found her match. So with that I say, congratulations Drew and Wil! Now is time for baby, right?! Do you think they will be making a baby announcement anytime soon?

Check out photos from Drew Barrymore’s wedding below!