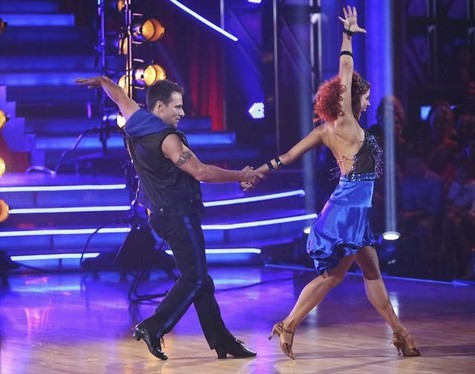 Drew Lachey and Anna Trebunskaya were eliminated during tonight’s double elimination on Dancing with the Stars. The couple scored a bottom-of-the-pack total score for the first two weeks on the All-Stars season. Last night’s performance was critically lauded by all three judges and earned them the highest personal score of their three week run on the show.

Lachey, the younger brother of Nick Lachey, won the second season of DWTS back in 2006 alongside his then dance partner, Cheryl Burke. Drew and Cheryl scored the second highest average score of all of the All-Stars contestants. Six years is a life time for an ex-boy band member, let alone an amateur celebrity dancer. The age showed and Drew was kicked off during the second week of competition.

During the first two weeks of dancing, Drew and Anna ended up in the bottom two.  The couple received 8 points from each judge last night, which pushed their overall season score to 68.8 and slotted them into 9th place on the overall standings. Their total score of 24.0 earned them a tied second last place of the night, with Kirstie Alley and Maksim Chmerkovskiy also tied up with 24.0 points.

Their elimination wasn’t a shock to any fan of the show, as our poll on Celeb Dirty Laundry showed that they were in the bottom three of the popular vote. Should they have been eliminated? Why didn’t the terrible Bristol Palin and Mark Ballas leave? Let us know in the comments below!