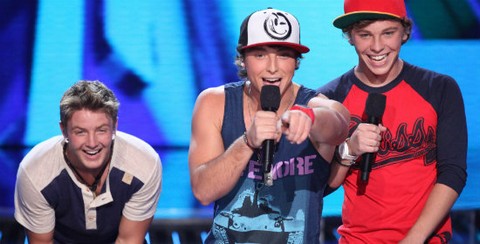 Last night’s X-Factor elimination show revealed the three acts in the finale – Tate Stevens, Fifth Harmony, and Carly Rose Sonenclar. It wasn’t really the biggest surprise to see Tate and Carly in the final leg of competition, as not only have they dominated the entire contest, but they’ve also been playing hopscotch for first place on the weekly leader board. It was a toss-up between Fifth Harmony and Emblem 3 – they both tap into the teenage demographic and similar voting blocs. Ultimately, Emblem 3 lasted as long as possible in the competition, but their time on the show came to an abrupt and fameless end last night.  Let’s look at the crumbling of the cookie, shall we?

Throughout the competition, Fifth Harmony and Emblem 3 were equals, but while Emblem 3 remained in the top three every week, Fifth Harmony had a bit of a bouncy ride. Fifth Harmony’s contrasting performances last night could have spelled doom, but they were fortunate enough to win over enough fans in the final push to make it to the finale. Their performances were extremely risky, but at least they took the risk and kicked dust in the eyes of Emblem 3’s weekly nonchalance.

Regrettably, there is no chance in the long halls of hell that Fifth Harmony will walk away with the title. They might have one of the most powerful demographics in the competition, but the majority of viewers have already chosen Carly as the golden child – the competition will be between Carly and Tate, no matter which way the coin toss falls. Fifth Harmony might land in second place by a stroke of luck, but that’s about as far as they will go in this competition.

Current trends indicate that Carly Rose Sonenclar will win X-Factor USA, except if Tate is able to pull off one of the greatest performances in the history of reality television talent competitions. It is extremely rare that a second placer wins the show, but there is a small possibility that he will win over enough independent voters to clinch the title.

Who do you think will win? Let us know your thoughts in the comments below. Remember, Celeb Dirty Laundry tunes in so you don’t have to tune out.