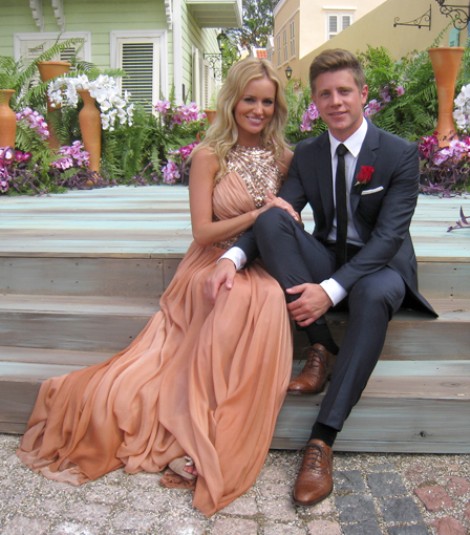 Emily Maynard’s wedding to Jef Holm might actually happen after all! The reality stars sat down with Life & Style magazine to discuss their engagement bliss and revealed details for their upcoming nuptials! Fingers crossed this doesn’t jinx anything!

“We’re thinking early spring 2013,” Jef told the mag. “We haven’t locked anything down yet, but we just know that’s the time frame we want to do it.”

A.K.A. We’ll do it whenever and however as long as its televised and we make a million at least! What? Never!

They may not have an exact date but that isn’t stopping Emily from getting her planning on. She’s all about the dresses and Jef, like every groom in the history of weddings, couldn’t care less on what she finally decides. “It’s been so easy,” Emily said. “I’ll show Jef the ugliest thing in the world, and he’ll be like, ‘Whatever you want, I want.’ I have an idea of what the whole thing is going to look like. I’m just glad I found the guy. The rest will come.”

I’ll TRY not to be a cynic but… is this wedding really going to happen? Just weeks ago Us Weekly had a cover insisting Emily was cheating. That can’t be good for the start of any marriage. But if Real Housewives of New Jersey star Teresa Giudice has taught us anything it’s that the tabloids can’t always be trusted… and you can put “licious” on the end of any word and make loads of dough.

And it’s not like happily ever after hasn’t happened before for Bachelorettes. Trista Rehn is still married to Ryan Sutter and Ashley Hebert is currently engaged to J.P. Rosenbaum. Three out of eight couples isn’t all that bad especially compared to The Bachelor’s scores! So good luck to them! But do you think they’re waiting too long to pull the trigger? From a normal point of view, waiting six months after you get engaged to get married is probably a smart idea, but these are reality stars. Attention is like oxygen! On a side note, I really like Jef’s brown shoes in the pic.