Emily Maynard Begs Jef Holm To Take Her Back! 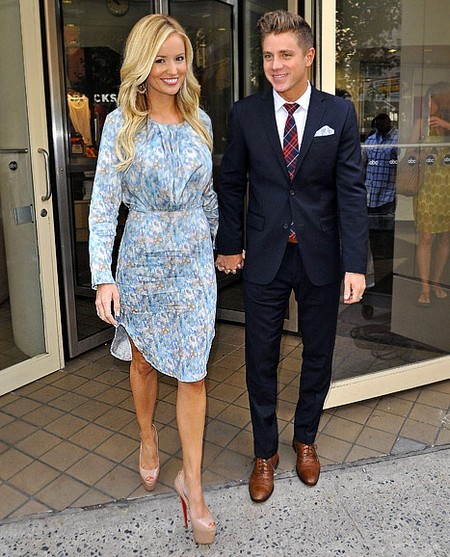 Emily Maynard isn’t keen on her 15 minutes of fame being up that quickly so she’s begging ex-fiance, Jef Holm, to give her another chance. She’s figured out that a reality couple does much better than a singleton in the fame longevity department!

But according to Star magazine, Jef isn’t playing along this time around. “She’s not prepared to be just an ordinary person again and will do whatever it takes to stay relevant,” a source told the mag. “Emily wants to be the next Tyra Banks, with a fashion line, and thinks that will only happen if she is part of a celebrity couple. Jef thinks he can do much better on his own. He has women throwing themselves at him – he feels like Brad Pitt!”

Oh Star… always a day late and a dollar short. Doesn’t it know that Emily’s already working on her next celebrity romance and it has nothing to do with possible polygamist Jef Holm? She’s been seen hooking up with nascar truck racer, Jason White. She’s denied it but gawkers spied her getting cozy with him on a date at a Carrie Underwood concert last week. “They were all over each other,” a source said. “Jason guided her through the crowd and held her hand as they walked downstairs.”

Having said that, I could believe that Jason White isn’t quite a big enough name for Emily. She’s nothing if not ambitious and I doubt a nascar truck racer is going to help her brand herself as the new Tyra Banks. So maybe there is truth to this story. Maybe Emily Maynard wants Jeff back for the cameras but plans to keep White on the side. These are reality stars after all – nothing is off limits when it comes to staying in the spotlight!

Would Jef be stupid not to reunite if Emily Maynard begs him to take her back? Does he want the spotlight as much as her?