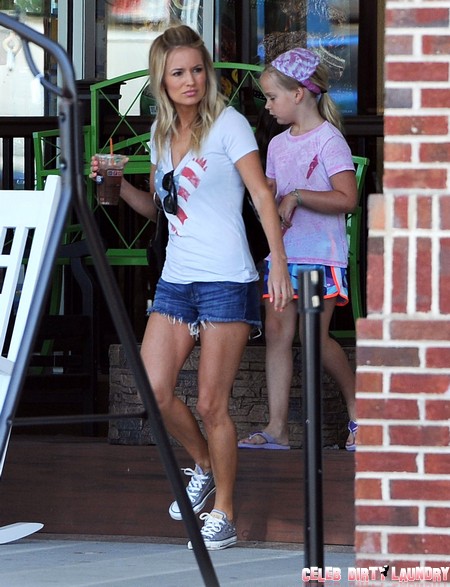 Earlier this year Emily Maynard thought she met her prince on camera on The Bachelorette. She chose Jef Holm and to fans, he did seem to be quite a catch. They made a cute couple and for every time that Em babbled about wanting to be happily married Jef gushed about how he believed that she could be his dream girl.  Couples on this show rarely last and this one made it only a handful of months before things got really messy and it was all made public. Emily is a cheating whore. Jef juggles women too. She just wants fame rather than love.

It went on and on with allegations of cheating, bribery and then came a supposed reconciliation a week or so ago. The lovebirds were back together and trying to keep things low key as they dined together at a popular eatery in North Carolina. There was enough PFA for onlookers to logically conclude that Emily and Jef were on again. Until a few days later when he was spotted getting touchy feely with a 22 year old. Of course Emily is flipping out, lashing out at Jef for playing her and beating herself up for giving him another shot.

But what about Em’s 7-year old daughter, Ricki Hendrick?  Her father was a race car driver that was killed in a crash before she was even born, so there is no father-figure in the young girl’s life. Emily had said that she was careful about introducing men to her daughter, but supposedly Ricki and Jef were close. Surely having this guy appear and quickly step into a daddy role only to exit just as fast has hurt her. Emily is so focused on herself- her love life- her stardom that it makes me wonder if she has paid as much attention to how Ricki is handling things.

Also if Jef genuinely cares for the child then he is a real dirt bag to keep playing with Em’s head because if Em is invested in the hope of a relationship with him then it’s likely that she’s passing that hope onto Ricki. Should this couple just pull the plug once and for all, if not for their sake then for Ricki’s? Tell us your thoughts in the comments below!