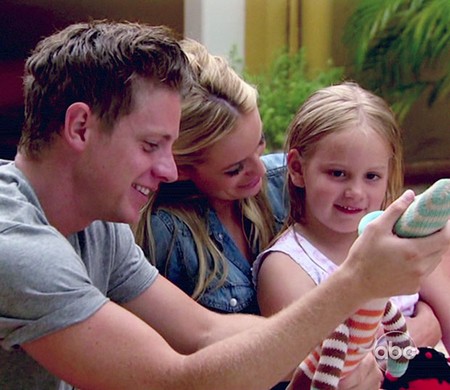 As if it wasn’t bad enough for the rest of us to have to watch the unravelling of Emily Maynard and Jef Holm’s engagement charade, the farce has taken on a menacing tone for Emily’s daughter.  Fatherless Ricki Hendrick, the daughter of Emily and the late NASCAR driver, Ricky Hendrick, is becoming a victim of her mother’s greedy famewhoring.

Ricky (Joseph Riddick Hendrick IV) who died in a plane crash 8 years ago, was the wealthy race-car driver scion of the obscenely wealthy Hendrick Motorsports family.  At the time of his death he was engaged to Emily who discovered after the tragedy that she was pregnant with Ricky’s child.  Josephine Riddick “Ricki” Hendrick was born without a dad and Emily has been sucking at the Hendrick family teet ever since.

The Hendrick family has been concerned about the risk to the well-being of their granddaughter ever since Emily got involved with The Bachelor.  Emily earned a failed engagement to Bachelor Brad Womack on the 2011 season of The Bachelor when she first tried hard to get famous.  Of course the unhappy but totally predictable end of her relationship with Brad hurt her young daughter and the Hendricks were understandably upset.  They hope for a stable loving environment for their dear son’s daughter – one that doesn’t include having a famewhore mom offering her wares on national TV.

Upon learning that Emily had won the lead role for The Bachelorette 2102 the Hendricks were furious.  They threatened to cut Emily off from their generous financial help if she persisted in once again making their granddaughter’s life a nightmare reality TV show experience.  But a famewhore like Emily can’t stay away from the cameras regardless of the cost to her little girl.

So while Emily is enjoying her fake engagement to Jef, her daughter Ricki, who at 7 can’t understand the soap opera she is living, becomes attached to her mom’s fiance.  Jef bragged to his former girlfriend Kaylee Shepard that his relationship with Emily is ‘basically for TV’ but the emotional bond and dependency fatherless Ricki is developing is very real.

In the October 15th print edition of Us Weekly we learn that as Emily and Jef continue their showmance for fame and money, ‘it’s Maynard’s daughter who will suffer when they split.’

Holm has been coaching  the girl’s soccer team – while making  sure to tweet photos of her to his 265,000 followers.  On September 26, he tweeted another picture of of Ricki (calling her his ‘gem’) along with a shameless product plug for headphones.  Hand in hand with Holm at the San Diego Film Festival, Maynard painted a portrait of joyful parents, bragging to reports about Ricki on the red carpet.  But when the audience vanished so did the happy family.  The next day as Maynard and Holm lounged poolside at the Grand Del Mar Hotel, the pair showed little affection and, says a source, ‘Emily seemed bored.’

Of course Emily seemed bored – she isn’t in love with Jef (just ask Matt Leinart) and probably wanted to get back to texting her with other prospects for true love.  If there wasn’t a child a involved in this nauseating travesty we could leave the situation alone and let Emily and Jef’s engagement die its natural death.  But here the two phoneys are, allowing little Ricki to develop a sense of family, which she sorely needs, while they both know they are never staying together.