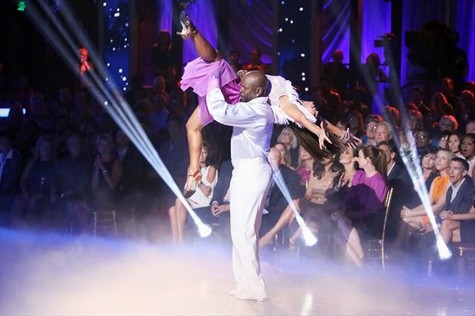 Emmitt Smith danced the Samba for his dance on DWTS Guilty Pleasures Week.  Emmitt Smith and Cheryl chose to dance their quickstep to her guilty pleasure song “Copacabana” by Barry Manilow on Dancing With The Stars All-Stars 2012 Season 15 tonight.  If you missed the show, we recapped tonight’s show for you and if you want to see how all the couples did go HERE!

Emmitt Smith and professional dancer Cheryl Burke, dancing the Samba.  Cheryl said this about their Samba, “It’s going to be something you would never guess [as] Emmitt’s guilty pleasure. It’s going to be pretty hysterical when you find out. That’s all we can say. I was shocked to even know that Emmitt loves this song. Right?”

Judges’ Comments: Len: “ Emmitt an unstoppable performance , well done”  Carrie Ann: “No one does a Samba like you, you have the samba pleasure.”  Bruno: “Always switched on you always deliver maximum pleasure, you deliver the best party in the country!”

Dancing with the Stars continues tomorrow and the four couples who performed their Team Dance on Monday night will dance their individual dances to their selected ‘guilty pleasure’ song, and the other four couples will take their turn on the dance floor with their Freestyle Team Dance.  Monday and Tuesday night scores will be added to the following week’s scores and votes.

Watch the video below and let us know what you think of Emmitt’s performance? Do you Emmitt did enough to keep her around next week? Sound out in the comments below!