Even Kim Kardashian Is Embarrassed And Sick Of Herself 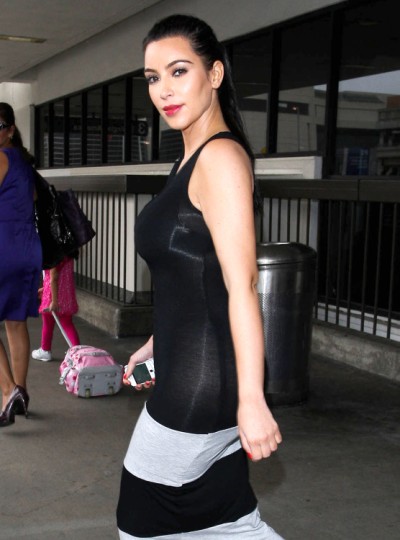 Kim Kardashian recently opened up and admitted that her 72-day marriage to Kris Humphries was embarrassing, but the sex tape star refuses to learn her lesson.

“Obviously when you fall in love and it’s happening so fast and it’s on a TV show and you get married on a TV and it doesn’t work out the way everyone had hoped it would, it’s kind of embarrassing,” she told Heat magazine. “So you don’t wanna open yourself up as much and you wanna keep things more private.”

Apparently Kim isn’t a great reader of history because what makes history so important is that we learn from our mistakes and don’t repeat them. But Female First magazine reports the reality star is not about to stop cameras from catching her romance with new boyfriend, Kanye West. “It’s real life and if we’re filming and Kanye comes to pick me up I’m not gonna tell the cameras to stop.”

Because that might be the responsible thing to do and everything. I don’t understand. She says she wants to stop being a joke but she refuses to stop acting like one.

Anyway, Kim’s also playing dumb on the world’s fascination with her incredible ass. She just doesn’t understand why people are so interested in the body part that she squeezes into the tightest pants and throws in our faces each and every day. “I don’t get the fact, like, why it’s talked about. I don’t get it. Sometimes I get bored of talking about it. Most women have one.”

Clearly Kim’s not up to speed on anatomy either. Every person has an ass Kim, just FYI.

Do you like Kim’s self-deprecation or is it coming across as too little too late especially since she uses her famous ass to make millions? And do you think Kim’s just a fool in love and a hopeless romantic or is she doomed to keep making the same romance mistakes on television?