Will Seth MacFarlane Be Fired From Oscars Over Oral Antics? 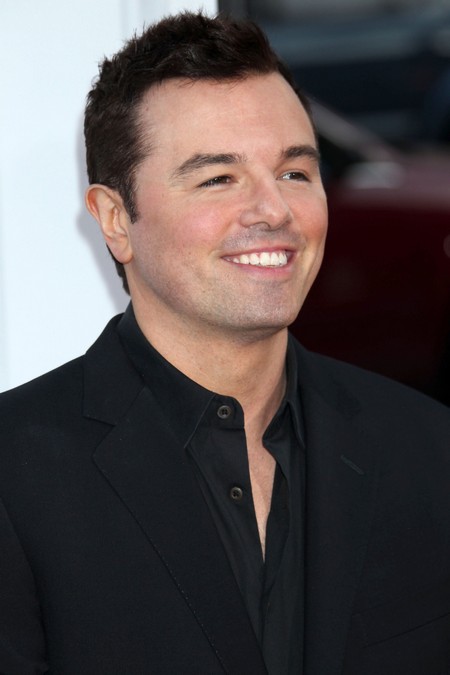 Seth MacFarlane has always pushed the envelope, but his critics are outraged that he’ll be on hand when they’re opened at the 2012 Academy Awards. Parents groups are up in arms over oral-sex mentions on a recent episode of MacFarlane’s animated hit American Dad.

Will the Academy cave in to pressure and can the edgy animator from the February awards broadcast? Last year, the Oscars were shaken up when director Brett Ratner was fired from producing the spectacle for making homophobic slurs (he used the dreaded “f” word). Slated host Eddie Murphy quit his hosting duties in protest over the Tower Heist directors’ firing.

We were left with Billy Crystal turning in an admirable, but sleepy turn as 2012 Oscar host. The aging Crystal still surpassed 2011’s epic failed pairing of James Franco and Anne Hathaway – the two seemed ill-rehearsed, nervous and decidedly unfunny.

Tapping MacFarlane to host the gig was welcome news for many who find the Academy Awards growing less interesting each year. Not only did MacFarlane create the oft-criticized yet wildly popular Fox animation powerhouse block of Family Guy, American Dad and The Cleveland Show, but he’s a talented song and dance man.

A classically trained singer, MacFarlane has just released a CD of big-band standards and has crooned to sold out crowds at Carnegie Hall and the uber-fancy Royal Albert Hall in London. With his first feature film Ted topping $450 million in ticket sales, MacFarlane brings a lot to the game, but his detractors may yet pressure the Academy into pushing him out as host!

While the Parents Television Council has been outraged by The Cleveland Show and Family Guy in the past, they seem particularly overwrought by the season premier episode of American Dad that aired this past Sunday, September 30th.  Gun toting title character dad Stan is looking to buy an eco-friendly SUV and sees the “HUMMIE C.O.K. GUZZLER” at the car lot and just has to have one. 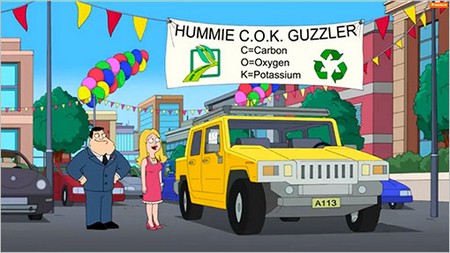 The objectionable acronym is explained as [C] Carbon, [O] Oxygen and [K] Potassium, and wife Francine says, “Wouldn’t it run cleaner if they added another carbon molecule before the potassium? Then it would guzzle C-O-C-K.” Husband Stan drily replies, “I don’t know what you’re talking about.”

The controversial 10 second segment of the show hits within the first two minutes and the remainder of the episode contains standard levels of Seth MacFarlane offensiveness – attempted murder by an alien, skinning a live person and wearing human flesh as a romantic gesture…

Christian crooner Pat Boone sits on the board of the Parents Television Council that’s urging Americans to file FCC complaints against American Dad and MacFarlane. For his part, MacFarlane is no stranger to protests by the council against him and says letters from them are “like getting hate mail from Hitler.”

He has hit back hard at the group in the past saying, “They’re literally terrible human beings. I’ve read their newsletter, I’ve visited their website, and they’re just rotten to the core. For an organization that prides itself on Christian values – I mean, I’m an atheist, so what do I know? – they spend their entire day hating people.”

The Academy of Motion Picture Arts and Sciences is known for running a much more conservative awards show than say the Golden Globes or MTV Movie Awards, so there’s a potential they could cave to pressure from the angry parents’ group. On the other hand, they are desperate to engage a younger demographic and MacFarlane’s antics are wildly popular – if controversial – so they may hang on to the multi-talented comedian despite the pressure!