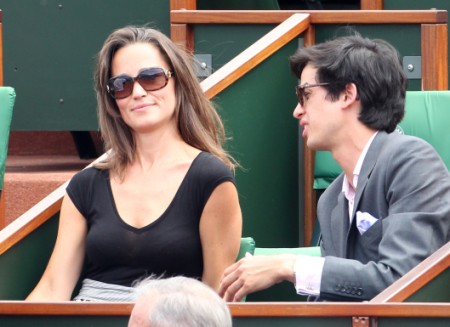 Famed fashion designer Karl Lagerfeld isn’t exactly known for his delicate disposition, especially when it comes to women who don’t fit into his perfect size zero model mold, but his recent comments against Kate Middleton’s sister, Pippa Middleton, are crotchier than usual and a bit below the bum, I mean, belt.

According to The Sun, Lagerfeld isn’t shy about his love for Kate and hate for Pippa. “Kate Middleton has a nice silhouette and she is the right girl for that boy,” he said. “I like that kind of woman, I like romantic beauties. On the other hand, her sister struggles. I don’t like the sister’s face. She should only show her back.”

What a b-tch! OK, I’m going into the corner and crying for Pippa because damn that was harsh!

Karl is no stranger to keeping it real. He’s also lambasted English singer Adele and German model, Heidi Klum, calling both too fat. On the other hand, he adores Victoria Beckham, whose willpower is praise worthy. “She had a career as a singer. She has a beautiful husband and stunning children and now she makes a career in fashion. And that body, after four children. There are not so many who have a body like that. She is very disciplined. We have the same eating habits. We did a full fashion shoot with her styled as Coco Chanel in less than three hours.”

I love how he has to mention they have the same eating habits! How bizarre! This dude is so full of himself. He obviously loves stick figures and hates curves. Whatever, he’s a fashion designer who wears gloves because he’s so vain he doesn’t want people checking out his veins. Pippa shouldn’t take heart. Pippa’s butt launched a thousand facebook pages and you can tell she eats hard food. I actually think Pippa’s body is better than Kate’s. She’s just as skinny but has more tone and muscle. You can tell she’s a runner. Kate’s just lucky because she’s taller.

What do you think of Karl’s comments about Pippa – too mean or right on the money?