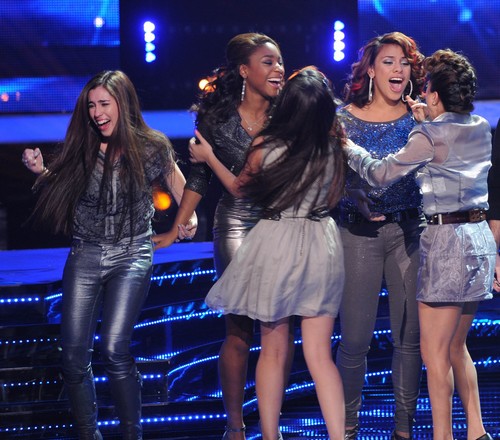 Fifth Harmony took the stage tonight on THE X FACTOR USA for their Top 3 DUET performance.  Fifth Harmony sang  with Demi Lovato for their duet.  They sang “Give Your Heart A Break” by Demi Lovato.  Tonight’s show the top 3 performed live in front of coaches Simon Cowell, Britney Spears, Demi Lovato and AJ Reid in a last bid for America’s vote.

Fifth Harmony had this to say about singing with Demi, “The girls can’t wait. “There’s been a lot of screaming about this one,” revealed Simon. “We almost cried,” said Camila. Almost? “In the crying competition so far, Ally [wins]. We now call her Rudolph because when she cries her nose goes red,” said Simon.  Simon gave the girls a standing ovation.  Demi said it was so much fun performing with the girls and she loves them.  The girls said it was amazing performing with Demi.  It pains Simon to say, but he tells Demi she was sensational!  Simon offers her a part in the group!

On tonight’s show the top 3 finalists – Carly Rose Sonenclar, Fifth Harmony, and Tate Stevens will have one last chance to impress American tonight.    The songs are not singing one, but three songs tonight.  Competitor Carly Rose teased, that they are performing multiple songs…like more than two each!  Did you miss tonight’s episode?  If you did we watched it and we recapped it here for you.