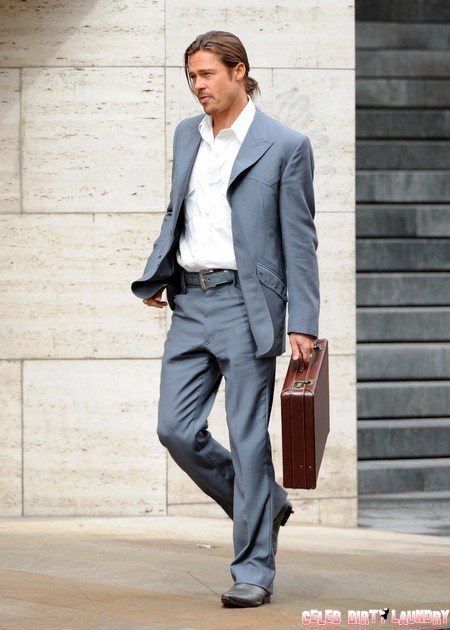 Did you know that just like every other hot actor in Hollywood, Brad Pitt would like to find himself slipping into one of Christian Grey’s high end suits?  Well, of course he would love to bag the hottest role of the year and help the Fifty Shades of Grey character leap off the pages and to life in front of movie-goers eyes. Plus Brad probably has some personal experience to bring to the role because you know that if he’s banging Angelina Jolie on a regular basis, well, anything goes. Absolutely, positively anything. In fact the couple was rumored to have built a little sex cottage on their French property last fall and anyone that needs their own special space to get busy is into some pretty hardcore stuff.

Anyway, Brad would love the role but the competition is stiff (lol) and let’s face it, he’s not turning back time and getting younger. In fact many of the names being kicked around belong to actors nearly half Brad’s age!  That has to be a bit of a shot to the old ego, wouldn’t you think?  A few fellow celebs have been asked to describe their perfect Christian Grey and they’ve suggested a younger Brad Pitt type. It appears all the ladies that have swooned over Brad are now conceding in somewhat gentle ways that the actor is indeed aging.

Could Brad pull off the part of Christian? I personally think he is far too old. Sometimes age doesn’t matter in Hollywood. We all know of roles where the actor was actually much older than the character they were portraying, but they need to look really young to pull it off. Brad looks much older than his late twenties so I just don’t see him pulling off the role of Christian. Do you think Brad can successfully play the part? Besides looking older, can he bring enough heat to the screen? Tell us your thoughts in the comments below!