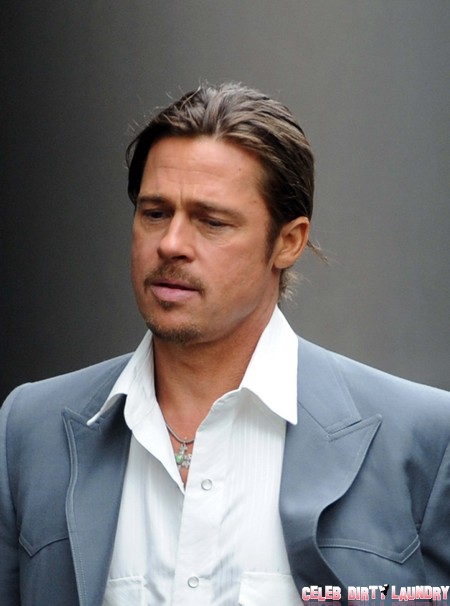 Brad Pitt and Angelina Jolie love spending as much time as possible at their $56 million estate Chateau Miraval in the South of France – but even with 35 rooms the busy parents of six have a hard time getting private time together.

To remedy that, Brangelina has splurged $40,000 to build a sex shack on a remote corner of the estate, far from the prying eyes and ears of their brood. As well as being sound-proofed, their sex grotto has a big bed, a sex swing with stirrups and a chest full of goodies. They disappear down there, telling their kids they’re going out for some fresh air. Of course we know that the Hollywood hotties are really off to play their own version of Fifty Shades of Grey – my question is: who plays Christian Grey and who plays Anastasia Steele?

An inside source told UK newspaper The Sun, “Brad comes back looking like the cat that got the cream and they are giggly for the rest of the day.”

Brad has admitted in interviews that it can be hard to get time alone while juggling their brood of six.  In a chat with USA Today, Pitt said, “We tell the kids, ‘Mom and Dad are going off to kiss.’ They go, ‘Eww, gross!’ But we demand it.”

The sound proofing may be a wise idea since in 2007 Brad and Angelina’s wild sex antics got so loud they terrified guests at their hotel. Screams from the lovebird’s suite were so noisy, fellow guests called security fearing an animal was being tortured, reported The Sun.

But when security at Kenya’s Alfajiri Villa Beach Resort banged on the door, Brad had to reassure them it was just an overzealous tryst, telling the guards, “Everything is cool, guys. You can leave. We’re okay.”

Brad and Angelina have undeniable chemistry – both on screen and off – so their sexy love shack will surely get lots of use! And although the duo were engaged in April, they don’t seem to be in any rush to get to the altar. Makes little sense – because the honeymoon seems to be endless and taking place before the wedding!