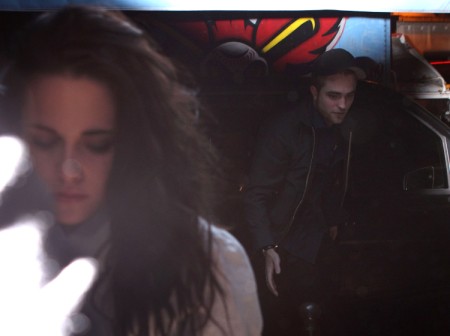 With a string of flops in his post-Twilight career under his belt, Robert Pattinson is jealous of girlfriend Kristen Stewart’s success and even forbidding her to consider the lead role in the upcoming sure to be smash, Fifty Shades of Grey franchise.

The National Enquirer reports Pattinson thinks the role is too “sexually charged.”

“Rob is stewing over her post-‘Twilight’ breakout success, while he’s struggling to find his footing,” an insider said.

Rob has every reason to be jealous. His movies Bel Ami and Remember Me drew disappointing numbers whereas Kristen was just ranked the highest paid actress in Hollywood last year per Forbes magazine. In addition, her movie Snow White and the Huntsman was a box office success and she’s already garnering critical raves with her raw performance in On the Road.

“Their career rivalry is driving a serious wedge between them,” an insider told the magazine. “They’re headed in opposite directions.”

At one time Kristen might have placated Rob’s sulking but not anymore. “Kristen feels betrayed – she doesn’t think Rob’s a supportive boyfriend…. Kristen thinks Rob is behaving like a sulking baby,” the inside continued.

Recent events show he has been acting out lately. He was spotted partying with friends instead of seeing Kristen off for the Australian leg of her Snow White promotional tour. And the insider said Rob refuses to walk red carpets or be papped with Kristen because he loathes the attention.

This break up is a long time coming. No offense Twihards, but I think Kristen is out of Rob’s league. She has too much talent. That’s not to say they can’t try to make it work, but insecurities are a major turn off and Kristen will only take his whining for so long. You give me one happy celebrity couple where the female does better than the male and I’ll give you ten break-ups that resulted from the power shift. You’ve heard of the Best Actress Oscar curse, right?