Finally, A Wedding and A Baby For Jennifer Aniston (Photo) 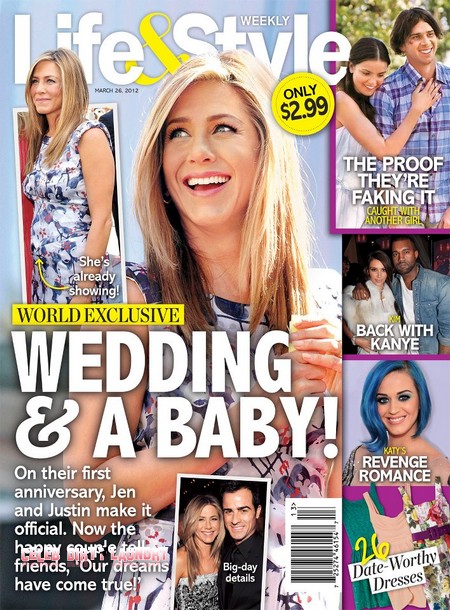 The March 26th, 2012 issue of Life & Style Weekly features the cover story ‘A Wedding & A Baby for Jennifer Aniston.’  The magazine claims that on Jennifer Aniston and Justin Theroux‘s first anniversary they are going to make it official and tie the knot.  The couple have let the cat out of the bag to their friends  saying: “Our dreams have come true.”

There has been speculation for some time that Jennifer is trying to beat Angelina Jolie down the aisle.  Rumor has it that Angelina and Brad Pitt are ready to get hitched any moment.  But we all know Jennifer Aniston pregnant or getting married rumors have to be taken with a grain of salt.  Jennifer has been getting married or pregnant at least 100 times in the past year according to the tabloids.  So far nothing has happened.

When rumors surfaced in late 2011 that Jennifer was pregnant she set the record straight saying: “I am not planning to get married any time soon.  I’ve been married once, and I don’t know if I’ll get married again.  But I can tell you that as of this very moment, I have no plan to get married. Got that?’  and about the pregnancy rumors she said: “ we’re not pregnant.  “It’s just I quit smoking, so I’ve gained a couple of pounds.”

So what do you think does Life & Style have the inside track?  Is Jennifer Aniston pregnant and getting married?  Sound out in the comments below.

Also included in this week’s issue they have proof that The Bachelor Ben Flajnik and Courtney Robertson are faking.  They also have the scoop on Katy Perry’s revenge romance.

To find out all this and lots more pick up the current issue of Life & Style Weekly!