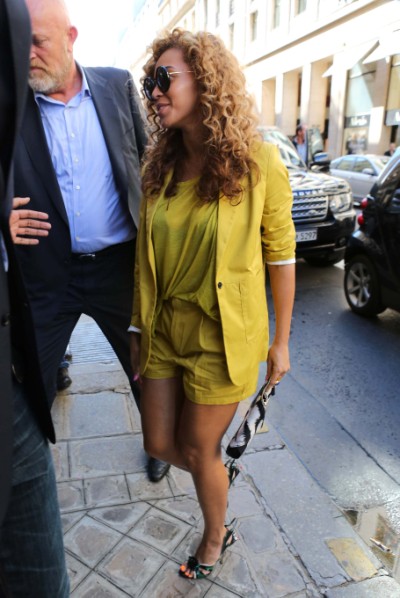 The whispers have been quiet over the past month, but the new sighting of a slight baby bump are sure to add fuel to the fire that Beyonce’s pregnant with her second child.

MediaTakeOut has the photo of Beyonce dancing at her husband, Jay-Z’s concert over the weekend in England and the Crazy In Love singer does appear to have a slight swelling around the midsection. Could it be baby or just too much fish and chips?

CDL reported the news that Beyonce was in the family way back a few weeks ago. A source close to the couple backed up his claim by saying Beyonce had stopped drinking alcohol and had even started taking folic acid pills again. I’m not too sure about the alcohol assumption. Beyonce is probably still breastfeeding six-month-old Blue Ivy, so staying away from the booze while doing that is probably a good idea. But the folic acid pills are interesting.

The website also said Beyonce didn’t show right away when she was pregnant the first time which is why the pooch is stubbornly small. I don’t think we can even use her first pregnancy as a basis of comparison since a lot of people still believe she had a pillow stuffed in there anyway.

Can you even get pregnant so soon after having a baby? Obviously you can. There are plenty of “Irish twins” out there, but I still have my doubts that this was a planned occurrence.

I thought Beyonce was in the midst of a comeback with her New Jersey shows being so successful, but maybe that was just a little reminder for us that she’s the best entertainer in the world before taking more time off to procreate.

What are your smutty suspicions? Check out the pic. Do you think Beyonce’s gestating or did she just forget to work out for a couple days?