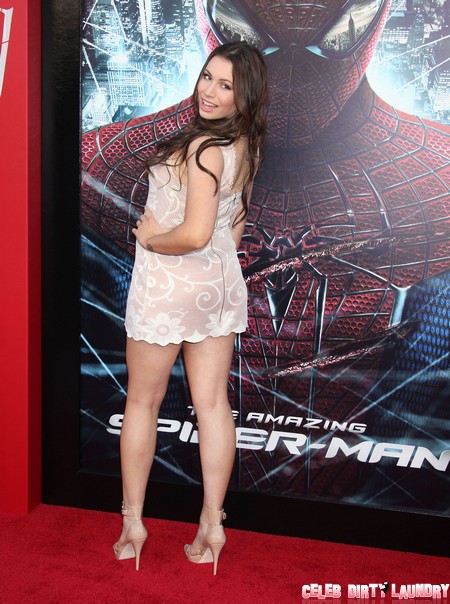 We’ve always said it must be really hard for the kids of universal celebrities to live in their parent’s shadow, and Sophie Simmons, the daughter of KISS frontman Gene Simmons wants to break out of her dad’s spotlight. During her wait for the X-factor auditions, she explained, “I really just want to step out of being the daughter of the guy from KISS. I want to be my own person and hopefully this is a way to show the world who I am.”

Of course, bringing mom and dad to wait in the mile-long line probably isn’t the best way to remain anonymous and succeed on your own! The 20-year-old lamented, “It’s just hard when the crowd turns into a mob of pictures and someone elbows you in the face to get a picture of your parents, and you turn around and go ‘that’s my dad, can you not push me out of the way?’”

Sophie is trying to make a name for herself, and she stayed through at least the Boot Camp episode, but is staying mum on whether or not she makes it through. This would be exciting on its own, but during her audition we spotted a diamond ring on her left hand! The diamond is small and the setting looks simple—perfect for the girl who wants to remain discreet, right? Sophie has been in a relationship for a year, but is also in college! I think she’s too young to make that commitment.

Fortunately, Sophie explained, “It’s actually my mother’s ring. I wear it for good luck sometimes.” Oh do you? Do we have any Sophie Stalkers who can confirm this? Who borrows a diamond ring from mom as a good luck charm? And then wears it on that finger? She went on, “I’ve been with the same guy for a year and a some change and I really like him, but I don’t think we’re getting engaged anytime soon. Not that I know of.” It would be so nice to believe her, but remember how sneaky celebs are! Remember when Anne Hathaway promised us a two or three year long engagement, and then suddenly got married this weekend? Sneaky woman! What do you think? Not-so-clever cover up, or an innocent gift from mom?