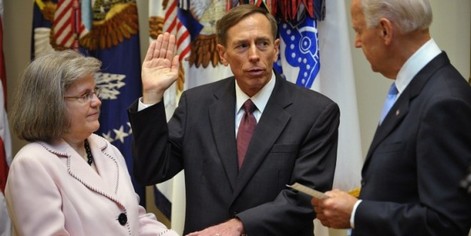 The former CIA director, General David Petraeus, has been all over the place during the past month. His heavily publicized affair with his biographer, Paula Broadwell, cost him his career, his public reputation, and now, according to the National Enquirer, also his 38-year marriage. David’s wife, Holly Patraeus, is allegedly demanding a divorce. We don’t blame her.

“Holly is furious. David humiliated her in front of the whole world. She can’t turn on a television, go online or open a newspaper without being bombarded by the latest revelations about his cheating. Leave him? If it were me, I’d kill him! Holly told David, ‘I want you out of my life!’ – and threatened him with divorce,” a source close to the couple explained to the National Enquirer.

The couple met during a blind date when David was a student at the United States’ Military’s West Point – a coeducational federal service academy located at West Point, New York. David graduated in June of 1974, and the couple married shortly thereafter. The couple then lived a typical military life and moved 24 times in the 38 years they were married. Holly, whose father was the West Point academy superintendent, stayed at home and raised their son and daughter. David only once publicly thanked Holly in a speech and called her “Mrs. Dad”, but when he was appointed as CIA director; his mistress sat only six seats away from his unwitting wife. According to David, his affair with Broadwell began in 2011, shortly after he left his military career. Holly also now suspects that David had another affair with Floridian, Jill Kelly, who initially lifted the lid off of the salacious affair when she received threatening emails from Broadwell. “David denies this woman was his mistress, but Holly isn’t convinced. She keeps asking him how many more women have been there over the years,” a source alleges.

Holly, who works as the assistant director with the Consumer Financial Protection Bureau, is furious at her husband’s wandering eye, even though David has been apologizing non-stop since the scandal broke. According to the friend, “David has been falling all over himself, apologizing and begging Holly to forgive him. But she isn’t listening. After all his lies, she doesn’t believe anything he says anymore, and she’s thinking about consulting a divorce attorney. Her marriage has already come crashing down. Now she’s ready to pull the plug.”

Unfortunately, David will receive no sympathy from us. If you do the crime, you have to do the time. The inevitable divorce will be a small price to pay for the lingering repercussions of such a heavily publicized affair. You go girl! What do you think? Do you think Holly should give her husband another chance? Let us know your thoughts in the comments below.