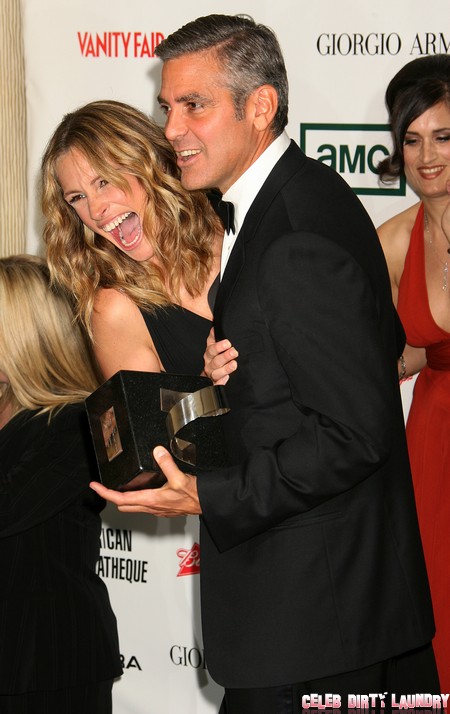 “Ah, what would life be without Julia Roberts?” She’s captivated our film screens with her infectious laugh, broad smile and Oscar winning acting. National Enquirer asked this same question in the latest issue, but directed it at someone else, “What would life be for George Clooney without Julia Roberts?” According to the magazine, it would be extremely drab and lifeless. New reports have surfaced that Roberts “knocked sense” into Clooney and saved his one year relationship with Stacy Keibler.

How did the Pretty Woman pull of such an astonishing feat? Especially since Clooney is one of the biggest playboys in Hollywood? Did she pull an Erin Brockovich on him and pummel him with arguments? Did she smile once and he died inside? All of the above, but according to an insider, it was a relationship saving talk that repaired Clooney’s fizzling relationship with Keibler. The source said, “When Julia heard that George was about to end the relationship before it got too serious, she told him Stacy’s a great girl, that he should latch on to her, and that he was too old to keep playing the field.”

Clooney and Roberts were working together again recently in Bartlesville, Oklahoma, where Clooney is producing his all-star film, August: Osage County. It was during this job that Julia took Clooney aside and whispered in his ear that he should settle down. Allegedly, Roberts told him that “marriage and children are more important than all the movies and Oscars and that he should marry Stacy and start a family.” Clooney agreed that he and Keibler have been struggling in their relationship, but that “they could still make it work.” The silver fox Clooney “still not made a promise about marriage.”

Julia Roberts, America’s darling, should receive a “Smile: You’re Happy!” badge for her role in fixing Clooney’s relationship. Hey, maybe she should take over from Dr. Phil? Her advice would be so much more interesting. What do you think? Do you think Roberts saved Clooney from infinite bachelordom? Let us know your thoughts in the comments below.