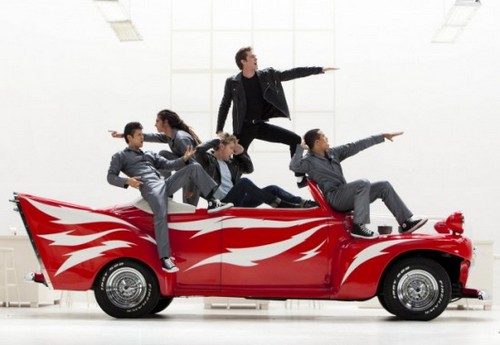 Tonight a whole new episode of FOX hit show GLEE airs called ‘Glease.’ On tonight’s show Grease is the word at McKinley. Rachel and Kurt pay a visit to Lima as the glee club launches its production of “Grease.” Did you watch last week’s episode before the hiatus? We did and we recapped it here for you!

On last week’s episode the school’s musical was in full swing, not all the gleeks were eager to participate; while some saw getting cast as a shot at acceptance, others had less altruistic goals. Meanwhile, an unlikely advisor helped Will and Emma work through a rough patch in their relationship, the arrival of student Ryder Lynn proved to be a game-changer for several members of New Directions past and present, Sue found a new narrow-minded cause to champion, and four finalists faced off for the lead roles as the cast for Grease is announced.

On tonight’s show the Glee cast performs songs from Grease. Rachel and Kurt pay a visit to Lima as the glee club launches its production of “Grease.” Meanwhile, Cassandra July returns to shake things up in Rachel’s life, and Santana comes back to lend a helping hand .

Tonight’s episode looks like it is going to be an emotional episode and you won’t want to miss it, so be sure to tune in for our live coverage of FOX’s “Glee” at 9 PM EST! While you wait for our recap hit the comments and let us know if you are enjoying season 5 of Glee, so far!   Also check out a sneak peek of tonight’s  episode below!

Will announces to the Glee club that he is taking a short sabbatical and leaving the school temporarily, he will be returning after sectionals, Finn Hudson will be replacing him. The glee club goes wild Coach Sue walks in and calls Will and Finn into Figgins’ office, she is not happy about this.

Rachel is at practice and now she can concentrate on things since she broke up with Finn. Cassandra tells Rachel that she is not ready to dance with Brody.

Marley thinks she is getting fat because she can’t fit into her Sandy costume, but little does she know that Kitty is having it taken in.

Finn apologizes to Sue about calling her baby retarded, but she doesn’t accept it. She also tells him that she has reserved the auditorium so he will have to find another place for his rehearsal.

Finn’s idea is to have the guys practice at the garage and it’s a hit, they sing “Grease Lightening”.

Rachel and Kurt get a Grease update, Sandy is getting so fat that she can’t fit into her outfit.

Kitty has hosted a sleepover for the Glee girls, she takes Marley in the bathroom and advises her to binge and purge to lose weight. The girls break out in a rendition of “Sandra Dee” and Kitty is awesome.

Finn is called into Figgin’s office and Wade’s parents are there because they are concerned about him, furthermore, they are going to tell him to no longer dress as a girl.

Finn is upset with Sue, he knows that she was behind telling Wade’s parents that he was playing Rizzo.

It’s time for the show and Marley has put on another two inches. Kurt and Rachel arrive at the show and bump into Finn and Blaine, awkward!

The show starts with Blaine singing “Beauty School Dropout”. Ryder walks into the bathroom and finds Marley trying to purge, she tells him that her mother is the school joke because she is fat and she doesn’t want to be that way. Marley sings “Look At Me, I’m Sandra Dee.”

Santana takes over for Wade as Rizzo and sings, “There are worst things I Can Do” with Wade sadly looking on in the audience, meanwhile Cassandra is flirting up a storm with Brody.

Kitty tries to get to Marley again before she goes on stage and Kurt kisses Marley to calm her nerves. Marley and Kurt do an amazing “You’re The One That I Want.”

Rachel calls Brody and Cassandra picks up, she tells Rachel that he is in the shower washing is hard chiseled body. Rachel is shocked, she can’t believe they are together, then Cassandra says that’s what she gets for going to a dumb play to watch her ex-boyfriend perform – which by the way, Cassandra convinced her to do.

Rachel sees Finn on the way out, he tells her that she is his moose, she corrects him by saying “muse” – but he did it on purpose to make her smile. Finn knows Rachel is upset and tries to get it out of her, but she won’t tell. Finn then tells her that he wants no further contact with her.

Meanwhile, Blaine wants to talk to Kurt but he is not interested and believes he shouldn’t have come back because it doesn’t feel like home anymore.

The show got rave reviews, Will tells the Glee club that he is leaving them in good hands and he is sure they are going to win the sectionals.