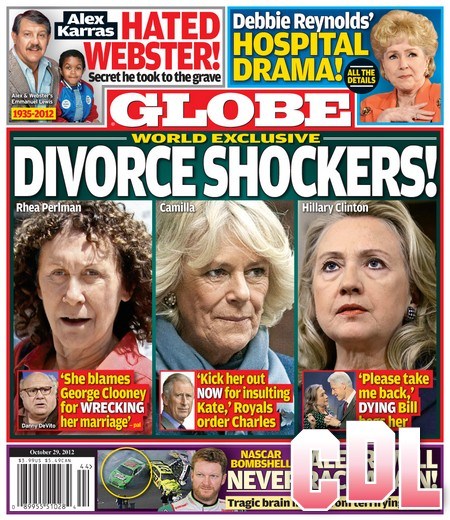 It seems that cruel Camilla Parker-Bowles has pushed one too many Royal buttons and is on the way out!  With all the scandal surrounding the Royal Family lately the last thing Queen Elizabeth, Kate Middleton, Prince William, and other senior royals need is trouble from within the fold.  GLOBE reports on this week’s cover of the October 29th print edition that Prince Charles has been ordered to finally divorce Camilla – and nobody except Camilla is disappointed.

Camilla has waged a long-running battle to undermine the lovely Duchess of Cambridge and hasn’t backed off despite Kate’s unfortunate topless and bottomless exposure all over the Internet.  Prince Charles’ booze-hound of a wife has envied Kate her youth and beauty while simultaneously fearing that Queen Elizabeth might change her mind and give the throne to William instead of Charles.  As GLOBE has reported in the past, this double trouble has driven crazy Camilla to attack Kate personally with horrific barbs, rude visits, and abusive phone calls. Camilla has used everything ranging from Kate’s commoner background to her bikini-clad honeymoon photo scandal, and finally the nude sunbathing in France to bring Kate down. In the print edition of GLOBE we will learn about Camilla’s fate and how another divorce will affect Charles’ already sullied reputation.

GLOBE also highlights this week’s cover with two more divorce shockers.  We learn that Rhea Perlman is blaming perma-bachelor and womanizing wolf George Clooney for her separation and impending divorce from Danny DeVito!  What did George do?

Even more startling are Bill Clinton’s pleas for Hillary Clinton not to divorce him.  What a divorce that would be.  Bill can rest assured that regardless of how much Hillary may hate him she won’t be filing her divorce before the November elections!

Also featured on GLOBE’s cover is Debbie Reynolds’ hospital drama – all the details are covered in this week’s print edition.

We also learn that recently deceased NFL legend and talented actor Alex Karras hated Webster!  OMG can you believe it?  Who could possibly hate that cute little kid?  Nevertheless, GLOBE exposes the secret that Alex took to his grave.

Tragically we learn that NASCAR icon Dale Earnhardt Jr. will never race again due to brain injuries suffered in his terrifying crash.  What an awful loss to the sport and his millions of fans.

Once again we see that GLOBE tops the list this week with the best stories!  Being fanatical about the British Royal Family I’m just dying to read my copy of the October 29th issue of GLOBE to find out exactly how they are finally going to get rid of nasty Camilla.  One thing I know is that Camilla is as tough and nasty as a wrinkly old Rhino and she won’t go down without a bitter fight.  I’m also excited to learn exactly how Clooney busted up a marriage that had survived over 30 years in Hollywood.  Leave it to Globe to get right at the most pressing issues and dig out the truth for their readers.  When I sit down with my copy of this week’s GLOBE I know I’ll entertained and enlightened – nothing makes my week quite like the GLOBE.