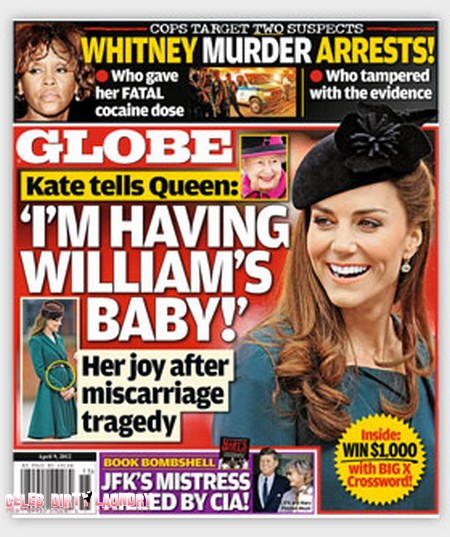 The April 9th issue of Globe Magazine features the cover story ‘Kate Tells Queen – I’m Having William’s Baby.’  The magazine claims that Kate Middleton is over the moon with happiness because she is finally pregnant.  The magazine previously revealed in February that Kate and Prince William were devastated over the loss of their first baby together.  It seems the couple are quick workers because if we are to believe Globe they are pregnant again.  Kate has even revealed the news to William’s grandmother Queen Elizabeth II that they will soon hear the pitter patter of little feet in the palace halls.

Globe has the scoop: Queen Elizabeth got the best news ever when William’s wife Kate revealed her well-kept secret – she’s having a baby. Kate was especially thrilled because she feared she might never be a mom after an earlier miscarriage. The new GLOBE has all the happy details including the special time when Kate will officially announce her pregnancy.

So is Kate pregnant?  No confirmation has been released by the palace yet, although the tabloids have had her pregnant for months now.  One thing for sure – we will know soon!  What do you think does Kate have a little bundle of joy on the way?  Sound out in the comments and let us know your thoughts.

Also included in this week’s Globe – they claim Police are reportedly set to arrest two suspects who fed tragic Whitney Houston the cocaine that killed her while she took a bath in her hotel and then tried to cover up by cleaning her hotel room before cops arrived.  Celeb Dirty Laundry revealed yesterday that Raffles van Exel told a Dutch newspaper he was the person who cleaned up the room after Whitney’s death.  Once we get our hands on the current issue of Globe we will let you know who they think did the deed.