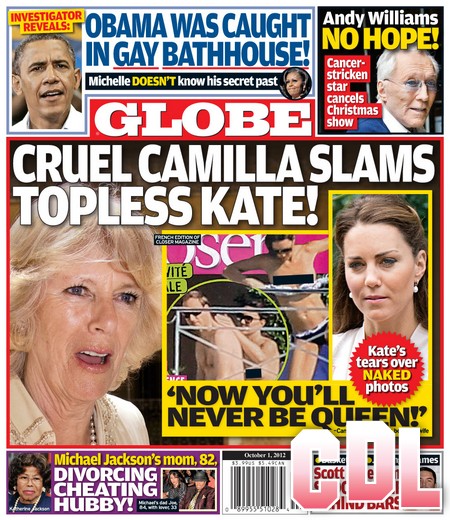 Kate Middleton and Camilla Parker-Bowles are not palace pals.  Prince Charles’ wife sees lovely Kate and charming Prince William as threats in many respects.  Kate and Will are vastly more popular with the British public than Camilla and Charles due to the scandals and shame the elderly couple have brought on themselves over the years. Recall that Camilla and Charles had a raging and lengthy adulterous affair while Charles was still very much married to William’s late mom, Princess Diana. Camilla fears that Queen Elizabeth II will change her mind and give the throne to her grandson and Kate. Of course this would be a GREAT idea however it would violate the customary line of succession.    Camilla also harbors great jealousy of Kate’s youth and beauty and as GLOBE reported recently resents Kate referring to her as ‘a wrinkly ugly old rhino.’

Now that Kate’s topless nudes are published in several magazines and available online Camilla hopes that the ensuing scandal will bury any possibility of Elizabeth allowing the Duchess of Cambridge to be the next Queen of England.  Of course GLOBE elaborates on the entire scandal in great detail in their October 1st print edition out this week.   One thing you can count on is that Camilla will make the most of Kate’s topless sunbathing exposure.  After all, royals of her generation do not go topless when they are outdoors!  In fact it is doubtful that Camilla even gets undressed around Charles any longer, given that he has been trying to escape her and her nasty madness for the past several years.

This week’s GLOBE cover tells of Andy Williams’ losing battle with cancer.  Apparently Andy has been forced to cancel this year’s much anticipated Christmas Show.  We wish Andy every chance at beating this horrible disease.  Andy is a classic entertainer, a true icon who has brought so much joy to so many fans throughout his stellar career.

GLOBE also reports on the cover that Michael Jackson’s mom, Katherine Jackson is done with her cheating scoundrel of a husband, Joe Jackson!  Apparently his latest affair, this one with sexy Indonesian 33-year-old Lavinia Iskander is driving Katherine to file for divorce.

We also get an insider’s view of murderer Scott Peterson’s life behind bars in this week’s GLOBE  – let me tell you, it is nothing nice.

There are other truly shocking scandals reported in this week’s hot issue of GLOBE but we prefer to let you discover them for yourself when you dig into your copy of the October 1st print edition.  We assure you that what you will learn when you read GLOBE this week will convince you that GLOBE stands alone as the bravest and most reliable source of breaking news available today.  In GLOBE I get to learn things that no other journal has the temerity and investigative spirit to publish!