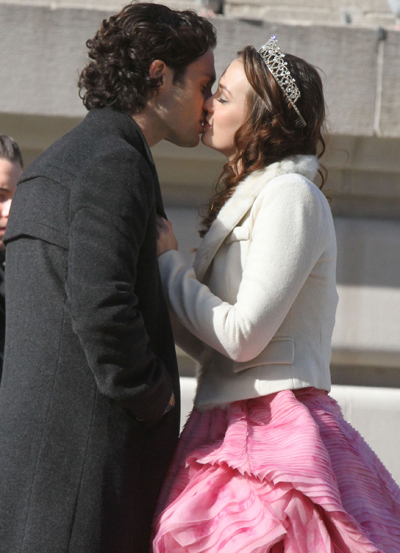 We hope the above, on-set photo of Gossip Girl actors Leighton Meester and Penn Badgley sharing a kiss is a part of some sort of dream sequence for an upcoming episode; otherwise, a lot of GG fans are going to be disappointed that the relationship between these two characters, i.e. “Dair,” is happening!

On the most recent, February 6th episode of the fifth season of the show, Blair was seen escaping her wedding to Prince Louis (Hugo Becker) with Dan’s help, after she realized that her marriage was going to be an elaborate sham. Later, it was revealed that Dan was the one who ruined her marriage to Louis, and not Chuck (Ed Westwick), who, in every episode, Blair declares her undying love for but finds a reason not to be with him. And, yet, in the picture above, it’s her platonic friend Dan, whom she’s locking lips with!

Devoted Chair fan would love to see Blair and Chuck finally reunited, but it looks like the Gossip Girl writers are determined to hold off on that resolution for as long as possible and continue to toy with this Dan-Blair-Chuck love triangle!